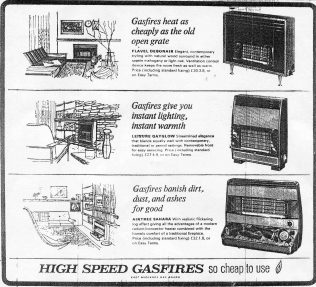 I left Sherwood Hall Boy’s School, aged 16, in July 1966 to start work as a Junior Clerk at East Midlands Gas Board (Emgas). Here I was to spend 10 years before I moved on to manage Blaskeys Wallpaper and Paint shop on the Marketplace. When you walked into Lime Tree Place from Bridge Street, and the wind was in the right direction, your nose would be assailed by the hops and malt from the Mansfield Brewery at the far end of the yard. What a welcome!

I suspect, but can’t remember that I was interviewed by the office manager, Maurice Draycott, and at least one other. As with some other older employees Maurice was a chain smoker, you rarely saw him without a cigarette. I was thrown in at the deep end to cover a position where the clerk, Pauline Greensmith, was off having a baby. I don’t think it was called maternity leave in those days but Pauline was away for a few months. Time enough for me to learn her duty which involved accepting all the jobs that customers wanted in the Mansfield district. I sat beside Alan Greenway who covered the Chesterfield district and in front was the section leader Colin Wildsmith and (was it) Brenda who covered the Newark district. Some names escape me.

The 3 district clerks had to organise how to proceed with the customer’s order. For example new cookers were pre-assembled at Long Eaton and delivered and fitted from there, so the job was sent there. Not all cookers as I learnt to my cost, the larger Canon and some others had to be dealt with as exceptions. For other types of appliances and simple installation work I organised a rep or the Fitter Estimator (FE) to visit the customer’s home. Elsie Martin dealt with the FE who both delivered fires and left material on site to fit the same. After a reps visit I would organise delivery of the goods. Once delivered the work was planned to a fitter by Colin Wildsmith. Sounds a boring position yet it wasn’t. These were the days without computers so everything was written down to completion when the final pieces of documents were filed. You had to accurately maintain records as the work progressed.

As a part of my employment I had to attend West Notts Technical College on a commercial course which included accounting. I never got the hang of double entry book keeping, or the South Sea Bubble incident and was glad when finally I could drop the course as it was agreed I was getting nowhere.

After completion of a job working documents were retained in the office files. The filing clerk at this time was a retired policeman who went by the sobriquet of “Bobby Jack”. To enter his Railex files was done with some trepidation but like all the staff they had a bark but all were helpful to someone wet behind the ears. Every house that had gas in the entire district had a file and so the final pieces of a job to “fix own cooker” or service a gas fire ended there.

Behind our section was the Telephone Bureau, today it would be titled Customer Service. The staff were all ladies and the two I remember are Dorothy Brunt and Nona Whitby. Nona married and I can’t remember if Whitby or March was her married name. Much later as I moved around the office and in one of its reorganisations I was “promoted” to the Telephone Bureau. On my first day the Section Head, John Turner, had me sign for pencils and a rubber which he duly cut in half as I wouldn’t be making many mistakes! This and other practices were all a part of the “welcome procedures” in the office.

Daytime drinks were served by yes, a tea trolley. It would turn up morning and afternoon with a large tea urn and coffee for those who couldn’t stand the taste of well brewed tea. On occasions when either the woman or man who used to make the brew was absent as the most junior clerk the task was delegated to me! It was certainly a job where criticism was easily gained.

Other people in the office at that time I worked with were Frank Littlewood on the service section. His role was to take customer complaints of faulty appliances, organise their repair and pass the job for billing. He kept a copy of every job and the fitter had theirs. Unfortunately a lot of the Fitter copies were never returned and to find them involved searching the fitting shop, the foremen’s records and Bobby Jack’s files to find a resolution to the problem. The jobs were generally chargeable so it was vital for Frank and anyone he could co-opt to find them! Herbert Stringfellow ran the Emergency Desk for internal gas escapes. To issue the jobs he had a short wave(?) radio to connect to the emergency vehicles in all three areas. He was “Mansgas Base” and each emergency fitter had his own call sign. They usually had mini vans to get to the jobs and in those days the colour scheme was orange and brown not yet blue and white. At morning start up a key could not be found to open a van then we all scrambled around the new office desks as these had the same make of key as the vans, invariably we always found a key!

At times I had to work Saturday mornings to cover the Emergency Desk and also the PABX board that was housed in another building. Having to take on these and other responsibilities filled me with confidence and I thank the staff who saw my potential. On these weekends we occasionally had a leak on the mains which involved the Distribution guys. My opposite number on the Distribution on their Emergency was Ron. He and I would have to liaise so our fitters could go back and check that customer’s supplies were on and safe.

The central heating section was run by Gran Downing (was it Gren?) ably assisted by Mabel Martin. Gran chain smoked at his desk and the ashtray was constantly full. In those days a customer with central heating could opt for a different cheaper tariff called “Two Part Tariff” a benefit of which was to have your appliances serviced free of charge once a year. Another John looked after the records which were hand written on cards and at times I had to raid his cards to find fill-in work for fitters. All the worksheets, except Service & Emergency, were duplicated on the Banda machine operated by the Banda Queen Shelia. Jack had to clear the job for printing, with a bit of cajoling, and then the same with Sheila. All good hearted and the work was progressed.

At the time I joined Mansfield had a fairly extensive stores with appliances, pipework and other essentials to keep the daily work of the fitters going. In their separate office there two mature ladies, Esmé and (was it) Joan, plus another girl junior clerk, Roy Gregory deputy Stores Manager and the Stores Manager. The two ladies were incorrigible and kept a young lad on his toes, they knew every innuendo in the book and had their own unique initiation ceremony for new recruits.

A further change in position led me to the New Housing section as their clerk. This was lead by Geoff Bray, with Norman Woods, Keith Barden and Paddy Shevlin and others I can’t remember. Housing development was on the rise and I was there to relieve them of the paper work. In the same area was the Commercial section, headed by Cliff Turner, and the Sales section with John Priestley as the Assistant Sales manager. Although not working for him he was great help and supportive when I did make one serious error. I remember him quoting for me that “rules are for the guidance of wise men and for the strict adherence to by fools”. I learnt a lot from John that stood me in good stead over the years. I remember a Home Economics section run by a bubbly lady whose name escapes me, they visited customers who had difficulty with new cookers and cooked a sample “meal” for them.

If you were strong of stomach lunchtimes could be taken in a dark, airless unkempt room used by the fitters and some of the cleric staff. Its only redeeming feature was that it had a snooker table in the room above. Many lunchtimes were whiled away there. There was butcher over the road in Ratcliffe Gate and he made his own pork pies in the mornings, they were often hot, just out of the oven at lunchtime, but always delicious. One of these at lunchtime made the “canteen” bearable. A couple of years later the office staff did have their own room with a boiling Ascot 303 water heater and a small cooker and clean tables. It also had the luxury of a gas fridge. (Who remembers them?) They were more efficient than electric and simply ran on a small gas pilot light. Lunchtimes also gave the opportunity to visit Mansfield Baths which were adjacent the brewery. Here I gained confidence in the water after learning to swim at 21. It was also the incentive to give up smoking, which I had started age 15, because I couldn’t swim a width under water without coming up halfway gasping for breath.

I moved from New Housing during the period of natural gas conversion. I was now planning the work to the Mansfield fitter workforce whilst the previous clerk was seconded to organising the weekly natural gas conversion. I got to know some of the fitters quite well and felt I did a fair job of issuing the work. The fitters were on bonus and jobs were timed, some tightly others not. There could be fallout from those would didn’t earn bonus which all of us planners had to take in their stride. We sold and fitted a lot fire and back boiler central heating installations in those days. This would entail removal of a fireplace, plastering up and fitting the new appliances along with radiators. A job like this took a week and one fitter I remember who regularly did the work was a Phil Severn. During this time I remember that the office was issued with at least 2 volumes of books containing pictures of the weird and sometimes homemade gas appliances found during conversion. Emgas was obligated to either find a way of converting the appliance or provide one of equal quality not necessarily new. As customers were buying new appliances we had a good supply of trade-ins to refurbish and offer these customers.

All the fitters were allocated to a Foreman and an interesting trio they made. I think a Jim Bettison looked after the Sutton area, possibly Arthur or Albert the Mansfield area. He was another chain smoker who always had liberal amounts of fag ash on his waistcoat, a real character. After I had planned the work he would, at times, change the jobs round his fitters, he knew their capabilities better than me, but I soon learnt. Then Keith Sheriston(?) who looked after the Service fitters. They had their own office within the fitter’s workshop.

I can honestly say that in the10 years I worked at Emgas it was with a dedicated group of people who were out to give the best they could to the industry. I enjoyed every moment but it was the reversal of my role back to New Housing, and the drop in pay, that lead me to seek pastures new.

With acknowledgement to J Wright for the illustrations found in 1965 editions of the  Chronicle Advertiser.