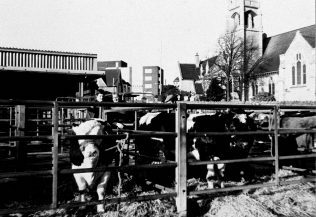 Mansfield was no different to most small towns and villages in its livestock trade, with perhaps three exceptions; namely Sheep, Chickens and a big fat Pig. Outside of the immediate town centre most householders would have had a few chickens and possible a pig or two. Around the parish were many farms, but most concentrated on agriculture rather than livestock, although most would have had their fair share of cattle, pigs and poultry.

During the 19th century and well into the 20th century, Mansfield was still small enough to have a ‘Town Bull’ and ‘Town Boar’. The bull being tethered at Bull farm, off Chesterfield Road, whilst the Boar was held at Rock farm up to 1944 when the last keeper, John Cauldwell died. He received an annual fee from the Duke of Portland to look after the boar. Those requiring the services of the boar had to take their sows to Rock farm.

Being a Market town, Mansfield held a regular cattle market since its commencement in January 1806. Initially it was held on the second Thursday of each month for “All kinds of fat and lean stock”. This market was held on Westgate around the old market cross until 1877 when the new purpose built cattle market was opened next to Titchfield Park , now the site of the Water Meadows swimming baths.

One of the major considerations taken into account by the 17th century Frame Work Knitters when seeking to relocate from their London base was the quality of the wool of the Sherwood Forest sheep. It is said that the sheep of Sherwood Forest were of a peculiar breed. Although they were small in size they were covered with a fleece having the wool of the longest filaments or staple and of fineness equal to any in Europe . Mansfield was considered to be the centre of Sherwood Forest , consequently the wool side of the Framework Knitting industry became established in and around the town.

Sir John Eastwood was the grandson of Adam Eastwood who had established a building company, based in Warsop, during the latter part of the Victorian era. Although John did join the family building business he was uncomfortable and had a yearning to become a farmer. At the age of 24, in 1933, John bought Belle Eau Park Farm and developed an interest in breeding turkeys and poultry. Over the next few years other family members died and eventually the building company and the farming company merged, with John as its head.

By 1959, the year that the company was floated on the stock exchange, John had developed a prototype poultry unit, at Bilsthorpe, for the breeding of Broilers (chickens bred for consumption).

By 1964 he had moved into large scale egg production. Within the next 12 years the company had become the largest egg producers in the World, producing 28,800,000 each week. One million broilers were also sold each week.

Turkeys were introduced to the company in 1974 and within three years they had an annual turnover of 2,000,000 turkeys. Then came the introduction of pigs; and soon the sales rose to 30,000 per annum. By 1977 the company’s annual financial turnover had reached £250,000,000.   For many years Sir John lived on Atkin Lane . His business attracted a large workforce from Mansfield and district into his nearby poultry farms although the Eastwood Empire stretched too many parts of the country, extending to 11,000 acres in size. Daylay, Chubby and Buxted were three of his well known trade names.

The pig passed through successive owners, who each exhibited it at shows; it grew bigger and bigger, with the last recorded statistics being: 144 stones in weight (916 kilos), about the same length and height and now measured 7 feet around its neck. It was said to be ‘only half fat’. Mr Matthew Hayes, a cottager from Warsop, bought two of its descendants and at one year old they each weighed 40 stones (255 kilos)!