You are here: HomenextTopicsnextSportnextForest Town Rangers 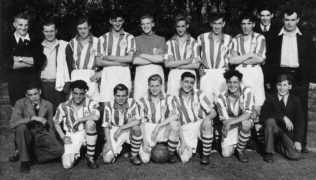 Forest Town Rangers Football Club was I believe the brain child of Mr Reg Ball (not Brudder), with the help of George Roades, Jack Percival and Ben Burton.

Our home games were played on the field at the top of Kingsway, I think it was part of Vincents Farm, and our dressing room was the old Tin Chapel. Although I don’t recall us winning any cups, we were always well up the table.

The following year was in the under 18s and again we did quite well, some of our opponents were Bilsthorpe, Skegby and Bradder Street, (we never could beat the latter). I seem to recall that after some dispute with the management several of us defected to play for Mansfield Colliery. In the March of that season I went to do my National Service so that is about all I can remember.

These memories written by Dennis (Lebe)Lebeter were first published in the Forest Town Crier, June 2004.