You are here: HomenextTopicsnextSportnextForest Town 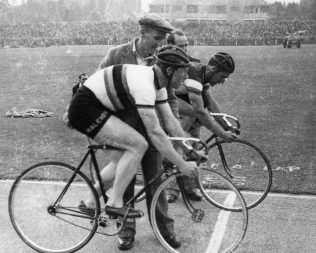 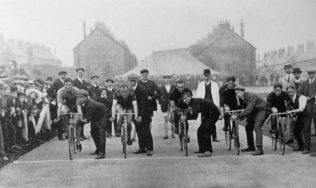 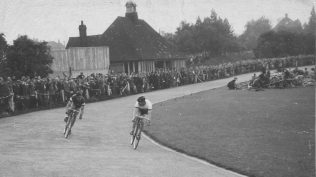 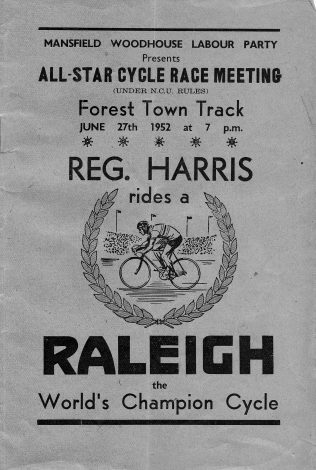 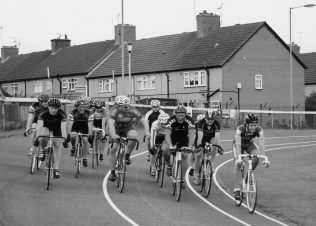 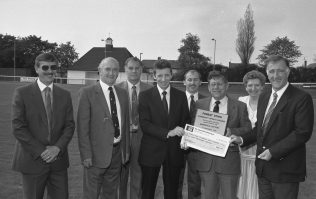 A track in the grounds of the Forest Town Institute (later called the Forest Town Welfare) was opened in 1908 at the same time as the Institute building. While the track was used for running, cycling, and parades it is the cycling events that people recall most of all. In years gone by as many as 2,000 spectators are said to have been at Forest Town for the cycling.

It seems the spills and thrills of the track events were something to be enjoyed by some lads from the village. They used to go to the bottom left hand corner of the track near Fourth Avenue , because if an accident was going to occur they said it would happened near that corner!

Ask any ‘Forestonians’ about the cycling events and they will say ‘and what about the ginger nut man? This man is described as being a little plump man with a moustache, who carried a large baker’s basket full of ginger nuts to sell, sometimes he was generous and gave the kids some. While everyone remembers him, no one knows who he was.

A report in the Chad newspaper in November 1987 revealed that the Forest Town Cycle Track which had fallen into disuse and disrepair could be on its way back to former glory. Work had started on a £42,000 [sic]improvement scheme to restore the track to the standards of the British Cycling Federation.

Newspaper headlines (Chad) on 22nd September 1988 read ‘New Sporting Chapter opens at Forest Town’. The article continued ‘Forest Town’s showpiece complex was officially unveiled on Saturday when two days of Gala celebrations got underway. The £30,000 [sic]venue at Pump Hollow Lane boasts an international standard cycling track, a football pitch, bowling greens and a cricket square.’ Part of the weekends celebrations was a cycling display by Mansfield Aces Cycling Club, who planned to use the facilities on a regular basis.

It is understood that Mansfield Aces ran the Cycling Track League events at Forest Town for a number of years, and they were still holding events there in 1991.

In 2004 the Forest Town Track was once again in demand after a track training facilities at Harvey Hadden Nottingham were lost, (Nottingham City Council had dug the track up to provide more athletic training lanes). Once again with the help of Mansfield District Council, Forest Town Welfare, and D.A.R.E. the track at Forest Town was resurfaced, and fenced to allow it to be used for training, and the track league. All the activities from Nottingham were transferred to Forest Town, and regular Wednesday night events were held.

Around 2006 (maybe before) the Track league events had been organised and run on a Wednesday night by Stan (Stash) Kalisz, The aim of the League was to encourage children and seniors to ride in a safe environment, additionally to hold events for seniors and veterans. Stan who was well liked and respected especially by the youngsters sadly died in 2008. In Stash’s memory it was planned that the Track League would continue during that year.

It was fitting that cycling still took place on the Forest Town track in 2008, as this was 100 years after it first opened in 1908.