You are here: HomenextTopicsnextBusinessnextIndustrynextMiningnextNational Union of Mineworkers 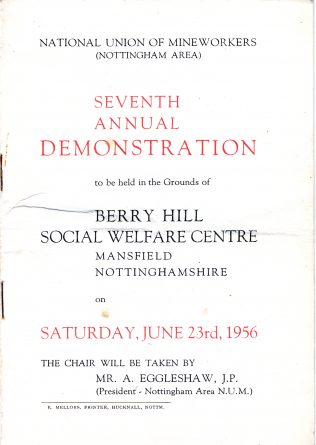 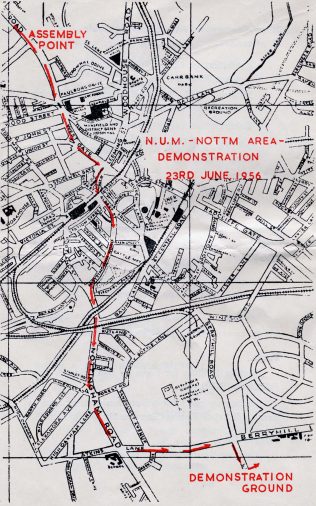 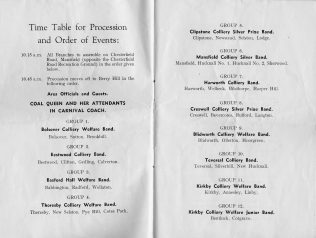 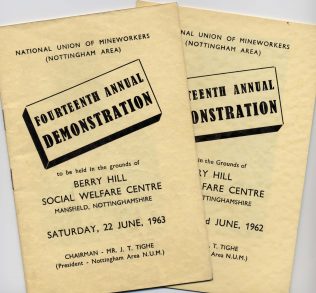 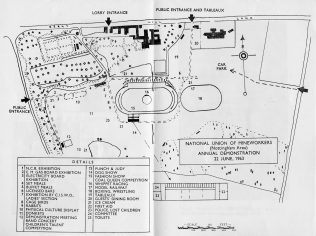 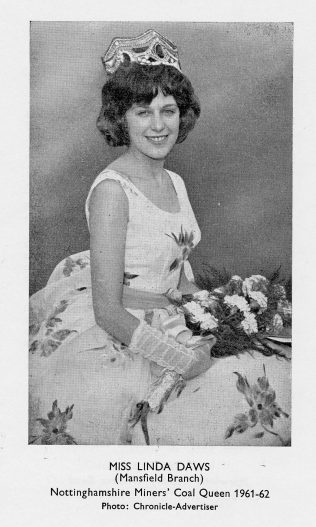 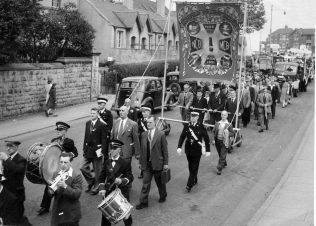 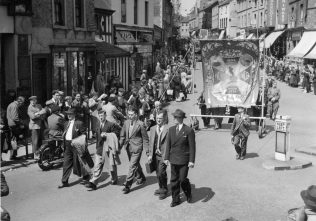 The National Union of Mineworkers (Nottingham Area), held what is referred to as an Annual Demonstration from 1949, until at least 1982. This took place in Mansfield.

The three surviving programmes (1956, 1962, 1963) pictured here reveal that it was an event that brought together many people for a ‘colourful demonstration’ of various Colliery Bands, their banners, floats, Coal Queens and attendants.

The parade which started on Chesterfield Road at 10.15am, then went through Mansfield and finished at Berry Hill Hall Social Welfare Centre at 12 noon.

Many people turned out to watch the parade, and then to join in all the activities at Berry Hill.

The welcome was followed by the singing of hymns led by one of the Colliery Bands or Choir. Then an act of dedication was given by a member of the clergy.

A Demonstration Resolution was made each year and formally moved and seconded. For example in 1963 the Resolution was moved by The Chairman, Mr J. T. Tighe, seconded by Mr A. Martin, and supported Mr W. Painter (Secretary of the NUM).

Presentation events included Ten Year Service Certificates, Cup to the Best Band on the March, and prizes for Tableaux.

Berry Hill Grounds were laid out with many stands such as exhibitions by the N.C.B., Electricity Board, C.I.S.W.O. Ladies Section, and Model Railway. There were displays of Wrestling, Whippet Racing, Physical Culture, Cage Birds, Rabbits and Mice, just to mention a few.

Additionally there was Fashion Shows and the Coal Queen Competition. This competition was where the ‘Nottinghamshire Miners’ Coal Queen’ was chosen from all the individual colliery Queens.

The judges for the competition in 1962 were Gwynneth Tighe, Joan Chapmen (Women’s Editor of the Daily Herald Newspaper, and Jack Burkitt – Nottingham Forest F.C.

Concerts were given by Colliery Bands and/or Massed Miner’s Welfare Choirs (1956).

There were such a great variety of things for everyone to enjoy or participate in at this annual event.

The individual collieries were proud to participate, to march behind their banners, hear their colliery band and to hope their own Coal Queen became the Nottinghamshire Miner’s Coal Queen.

Sadly with the demise of the Coal Industry these events are now part of our local history.