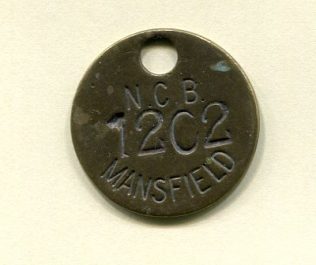 Brass ‘motties’ or ‘checks’ were used to identify miners whilst underground. If an incident occurred underground the motties would help to quickly identify which miners were in that area of the mine. An electronic swipe card system was later introduced, although many continued to use motties in the event of the system failing.

Have you got a brass ‘mottie’ that you would like to donated to Mansfield Museum? We would like a mottie from Crown Farm, Warsop Main and Sherwood to go on permanent display in our new Made in Mansfield gallery. Please contact Jodie Henshaw at Mansfield Museum 01623 463088.