You are here: HomenextTopicsnextTransportnextMansfield's Ancient Highway 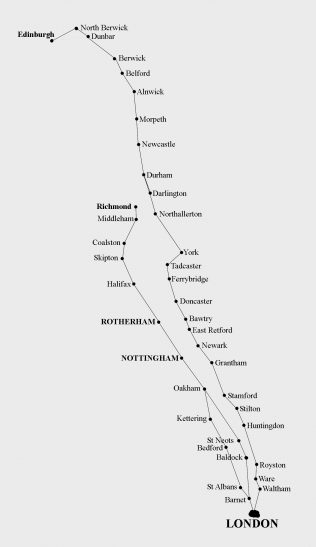 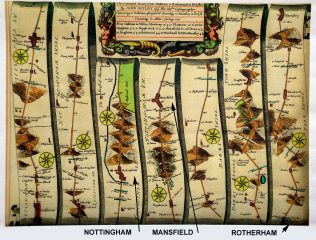 Today we have two main routes running north from London, the A1 London to Edinburgh (originally the Great North Road) and the M1 Motorway London to North of Leeds. Early maps reveal there was also two routes in the past, with the alternative to the Great North Road passing through Mansfield.

A postal map of ‘The Great North Road and Principal Cross Roads of 1756’ shows this alternative route going north from London.

Other evidence supporting the existence of this alternative highway as being ancient is a legal document in Rotherham Archives. In 1723 a new owner of Whiston Manor was trying to close the road through his land, and the Feoffee’s of Rotherham contested this, maintaining the right of way by custom and practice. The document refers to this road as being an ancient highway even then. There is suggestion that it may even be a Roman road going north (could this be associated with Mansfield Woodhouse Roman Heritage?).

Is the the main road named ‘North Road’ through the town of Clowne (located between Mansfield and Rotherham) a clue to its origins as the alternative route to the north?

The normal means of transport at this time was horseback, horse drawn wagons and Stage/Mail Coaches. They were not ‘made’ roads as we know them, but were badly pot holed and possibly deep ridged from cartwheels. Mud was also a major problem for most of the year. The best route, particularly in winter was to keep to the drier high ground/ridges away from the wet boggy ground of the lowlands.

The 1675 John Ogilby Map of the (London) Oakham to Richmond Road clearly shows the road following the high ground, along the ridges of hills passing through Nottingham, Mansfield, and Rotherham.

In the 18-century Turnpike Roads (Toll Roads) were seen as a solution to the funding needed to overcome these problems. Listed below are the known local Turnpike Roads with the Nottingham and Rotherham Turnpikes being the converted ancient highway.