You are here: HomenextTopicsnextNaturenextThe Newt Pond in the Old Sand Quarry.

The Newt Pond in the Old Sand Quarry. 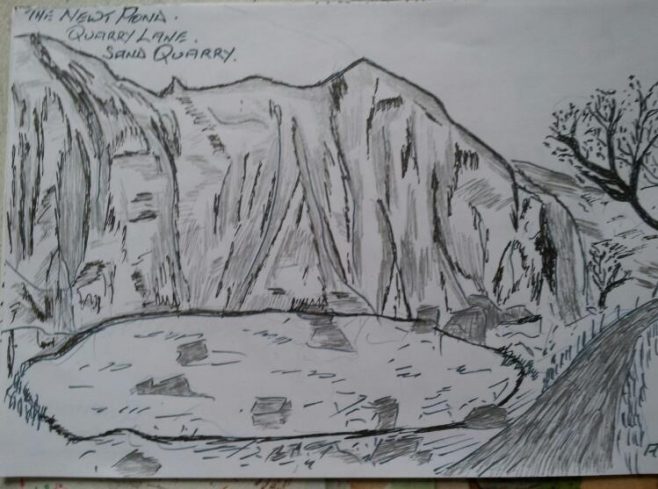 I doubt very much if there are many who remember the pond in the Quarry.

The pond that was, when I was a youngster, a breeding habitat for the many newts that lived among the stone rocks that sat in the pond, often used as stepping stones for we very excited children learning about pond life. ( Although we didn’t realise it at the time ).

The pond, although I don’t know if it is still there, was in what we called the old Sand Quarry, obviously, it had been worked out many years before.

To describe just where the pond was situate, we have to pass under the railway bridge that led into the quarry. On the right, you passed the house in the quarry where Joe Smith lived and kept his horse, dog, pigs, and chicks. Straight along from the bridge led you along a stone chippings path to Gregory’s Quarry and huts, into the working stone quarry that still produced the stone for building.

That just left , on the left, the old Sand Quarry.  This old quarry had been left to allow nature to take it’s course. The beauty of this place attracted walkers, with their regular visits, to enjoy the weekends walking and enjoying the beauty , turning what used to be a hive of activity, into a local beauty spot. It became quite a regular haunt of the American Soldiers.

The pathway through, was in the sort of lowlands of the quarry. For on the right was a high embankment that after being left for many years, turned into an embankment full of trees and green grass carpets. A narrow trodden path meandered through the trees and back down to the valley.

Along the left hand side of the quarry’s valley, was a rock face that was around 30 feet  high. At the top were a few allotments that someone had made use of before you came to the railway property lines.

It was at the bottom of these rocks that a smallish pond had formed, maybe from a freshwater spring, of maybe from ground water seeping through to the lowest point. Nevertheless, it was here that the newts decided to make this lovely sheltered pond, their home.