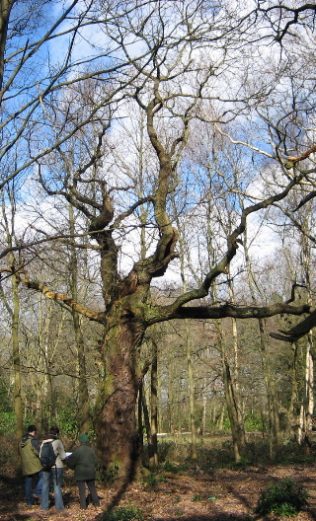 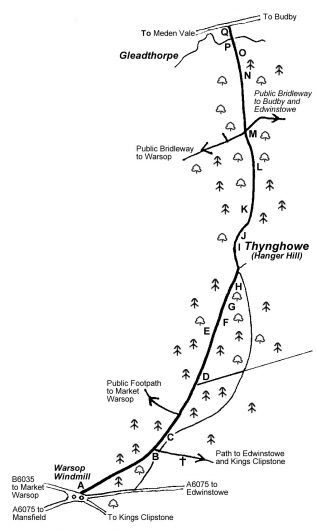 zoom
Map of the Thynghowe Trail 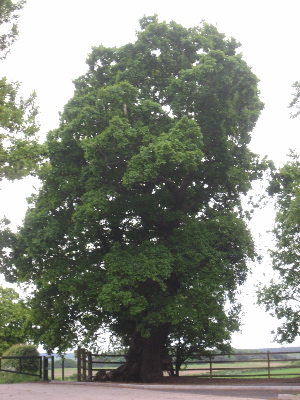 zoom
The Parliament Oak marked the boundary of Clipstone Deer Park and Warsop. It is about half a mile from Post A along the A6075 towards Mansfield. 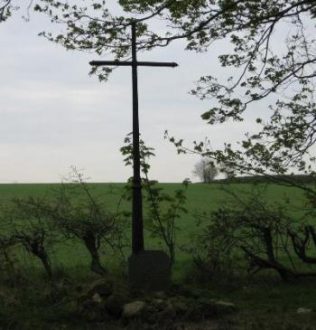 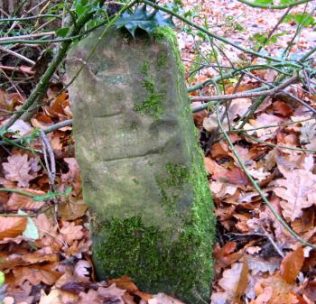 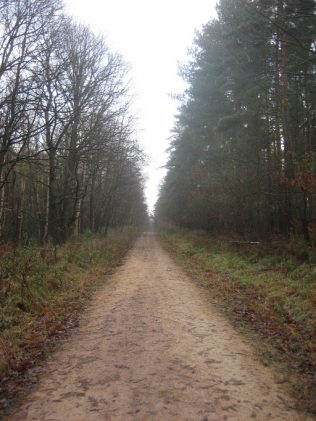 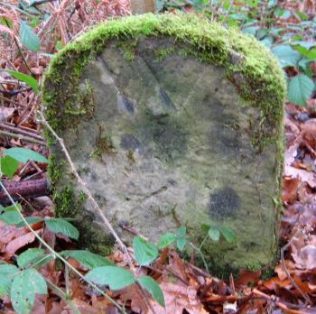 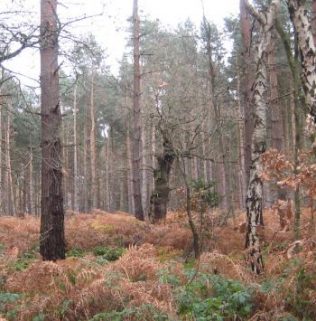 zoom
An ancient oak surrounded by conifers near Post G 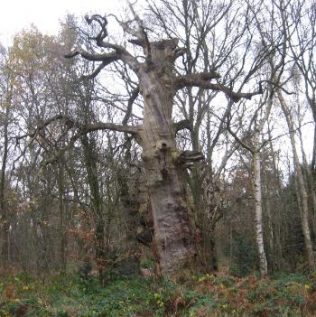 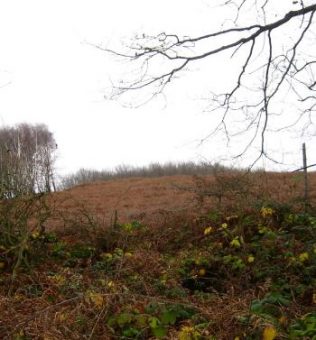 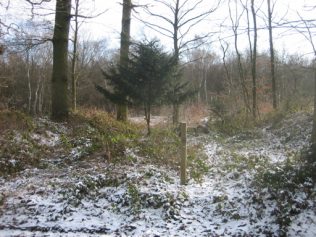 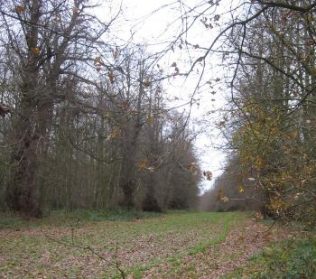 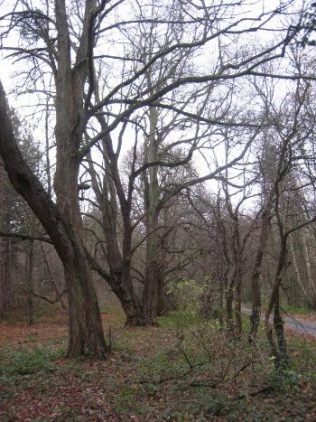 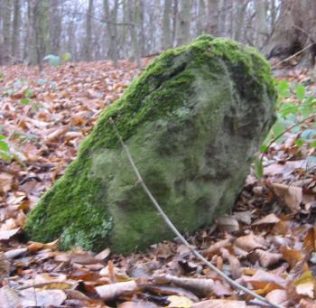 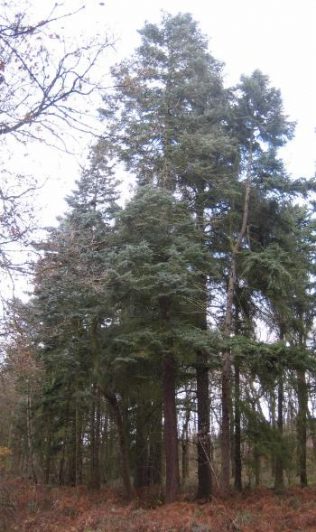 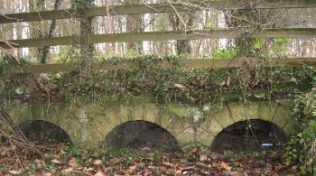 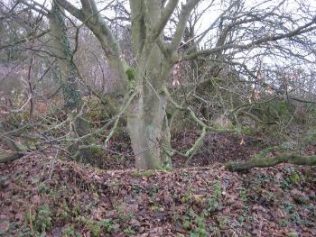 On 26th July 1816 a group of Warsop folk walked around the edge of the Manor of Warsop, checking the positions of markers and participating in events to establish the boundary in their memories. The rediscovery of a document describing this perambulation inspired the research which resulted in the creation of this trail to share the remarkable story of this part of Sherwood Forest.

The most prominent feature along this trail is Thynghowe, now known as Hanger Hill. This site has still to reveal many of its mysteries but it has been an important meeting place for well over a thousand years. It is located on the boundary between three parishes and may once have been an important location on the border of the kingdoms of Northumbria and Mercia.  Its name and structure suggest that it was a Viking age assembly site.

Throughout this walk you may become aware that the paths lead up to this hill and that you are following in the footsteps countless generations of forest folk and the aristocracy who controlled their lives.

The Thynghowe Trail hopes to give an insight into the past of the Birklands area of Sherwood Forest through Saxon times, the Crown Forest, the era of the Welbeck and Thoresby estates, to modern forestry and military use.

From Warsop Windmill it follows the public footpath into the forest. Thynghowe Trail waymark posts mark the trail.

• The distance from the roundabouts at Warsop Windmill to the road at Gleadthorpe is 3 miles.

• The trail follows public footpaths or bridleways and has a reasonably good surface with no stiles.

• Other routes in the forest may not be public rights of way.

• Ordnance Survey Explorer map 270 – Sherwood Forest is recommended if you are venturing away from this route.

• Please take care to respect the wildlife and archaeology of this special area.

The waymark posts in the trail are marked with the letters A to Q.  These notes describe the features highlighted by each post.

We start at the south-west corner of Birklands. The open fields across Gorsethorpe Lane are on the edge of the Clipstone Deer Park where Plantagenet kings hunted whilst they stayed at The King’s House between 1181 and 1393. The park was surrounded by paling to contain the deer. In the chestnut wood across the Edwinstowe road are earthworks including the mediaeval deer leap where deer from Birklands were herded into the park.

The public footpath into the forest follows the parish boundary between Warsop and Clipstone. The ancient Forest of Birklands was to the right of the path whereas the more recent plantations on the Warsop side are on ground that was previously mainly heathland.

The site of St Edwin’s Chapel is approximately 250 metres to the east along this track. Between the 13th and 16th centuries a chantry chapel commemorated King Edwin of Northumbria whose body was taken to the place now named Edwinstowe following his death during the battle of Hatfield near Cuckney in 633. From the reign of King John a hermit was paid to live and pray here and these payments continued until the chapel was abolished under Henry VIII. The 6th Duke of Portland erected a tablet and iron cross in 1912 to mark the site of the chapel.

A stone marked with E for Edwinstowe marks the parish boundary is one of five boundary stones along this section of the trail leading to Thynghowe.

Near this point on the 1816 perambulation a minor boundary dispute was recorded “ at a place where the boundaries of Edwinstowe Clipston and Warsop meet the Letter W was dug upon the Turf and the Letter E appearing to have been recently dug on an Edwinstowe Perambulation was filled up as being considered as an encroachment upon Warsop”.

Green Drive, which cuts straight through the forest, was created in 1710 by the Duke of Newcastle by warrant of Queen Anne. Around this time the Forest of Birklands was passing from Crown ownership to the 3rd Duke of Newcastle. On his death these lands attached to the Welbeck estate passed to his daughter Henrietta who later married Edward Harley, Earl of Oxford. Their daughter Margaret married the 2nd Duke of Portland and consequently Birklands came under the control of the Dukes of Portland. Around 1825 the 4th Duke negotiated with Earl Manvers of the Thoresby Estate for the exchange of the eastern part of Birklands for lands closer to his Welbeck estate.

In the late 19th century the first plantations were established to the west of the boundary. This area is called The Lings and was previously uncultivated heathland. No woodland or field boundaries are marked on the 1825 Warsop enclosure map but plantations appear on the Nottinghamshire Atlas of 1890 and on the 1900 Ordnance Survey map.

Along this stretch more boundary stones are found, marked with a W for Warsop. The original trackway ran to the east of the present path and its route can be detected from the hollow in the ground and remnants of hawthorn hedge. Looking along the trackway towards Thynghowe gives an impression of how this route leads directly to the top of the hill.

The account of the 1816 perambulation recounts one of the traditions that fixed the boundary in people’s memories – “it appears to have been the ancient Custom to dig a cross at that Stone which is called the Golden Cross said to be so called by an Old Man of the name of George Johnson putting a Golden guinea upon the Stone on which he made a boy stand upon his head and rewarded him with the gold”.

Looking past the conifers to the ancient oaks gives an indication of the wood pasture of Birklands before modern forestry arrived. Well-spaced oaks and birch stood in pasture grazed by deer and also by domesticated livestock such as sheep and pigs belonging to inhabitants of the surrounding villages. During the 1600s Birklands contributed timber for the construction of ships for the expanding navy but by 1672 it was reported that very few trees remained that would be of use to the Navy. Iron making also had a major impact in the 17th century and a forge was built at Clipstone, 3km south of Thynghowe. Charcoal production required large quantities of cordwood and woodland management was neglected during the Duke of Newcastle’s exile on the Continent from 1644 to 1660 following the Civil War. By 1709 the permission to create Green Drive referred to “the decayed wood at Birkland” and a 1710 letter mentions “declining cordwood in Birkland”

This remarkable old oak was described in the account of the 1816 perambulation of Warsop Manor as “apparently as old as the most ancient tree in Birkland … remarkable as being the only ancient oak tree which remains standing in the Manor of Warsop”. It used to display the number 002 on a metal plate – all the ancient oaks should be identifiable by these numbers.

This view up Hanger Hill gives a sensation of the significance of this meeting place dating back more than a thousand years. Its old name of Thynghowe suggests use in Saxon/Danelaw times and it was still a significant spot on the 1816 perambulation as “according to ancient custom bread and cheese and ale … was given away to a number of persons from Warsop”.

This rectangular hollow marks the site of one on the many ammunition stores that were located in Birklands during the 2nd World War. The army requisitioned Birklands on 12th March 1942 and remained until the 1960s.

Hanger Hill Drive provided access to the pleasure grounds of Birklands from Welbeck Abbey. It is also known as Lady Anne’s Drive as it is believed to have been created for one of Queen Anne’s visits to the Duke of Newcastle’s Welbeck estate around 300 years ago. It is lined by an avenue of lime trees.

This section of the Warsop / Budby boundary is marked by large lime trees and also some oaks. Trees were planted on boundaries as they could not be moved whereas other markers could. Evidence of the old trackway and the hawthorn hedge can be seen. This path leads directly to the top of Thynghowe although the modern public right of way skirts the hill to the west. Limes were also planted along the edge of Lady Anne’s Drive.

An ancient stone in the woodland not far from this point marks the corner of Budby Forest. The 1816 Perambulation account says “we arrived at a very ancient boundary stone set upon Budby Forest said to be the Stone set to mark the extent of Budby Township and which Stone William Wilkinson one of the Jury aged seventy five years deposed that he recollected being there ever since he could remember anything and he was born within the Manor of Warsop”

The trees planted here enhanced the view from the drive between Welbeck and Birklands for the Dukes of Portland and their guests as they travelled along Lady Anne’s Drive between Welbeck Abbey and the pleasure grounds of Birklands. You may try to count the number of different conifer species along this stretch. There is evidence of the Dukes’ impact on elsewhere in Birklands; we have already passed the grove of yews planted near Thynghowe although the Russian Log Hut that that was purchased by the 6th Duke in 1874 and erected near the Green Drive was demolished in 1954. Local people can still recall the Duke of Portland driving into the forest along the tarmac road in an electric car.

The culvert that carried water beneath the drive is part of the water meadows scheme created by the 4th Duke of Portland in the early 19th century. His ideas were developed further in his larger scheme at Clipstone. The quality of the stonework is impressive. It gives an insight into the operation of the experimental flood meadows created by the 4th Duke of Portland where the land was levelled and channels dug to divert water onto the fields to improve the quality of the pasture. An indication of the complexity of the system is given by the quality of the stonework on the culvert that passes beneath the start of Hanger Hill Drive. The Duke later improved these methods for the Clipstone water meadows, gaining a considerable increase in productivity from his land by allowing livestock onto the pasture earlier in the year and by the animals providing manure which increased the fertility of the arable land.

This circular earthwork is a World War II machine gun post providing protection for the ammunition dumps that where located in the woodlands both to the north and the south of this point.

Evidence of a Roman fort has been found in the cultivated field across the road. Cropmarks suggest a Roman temporary camp on the summit and slopes of an isolated hill on the north side of the valley of the River Meden. The site commands extensive views west and east along the valley, and also to the south and north where the ground slopes away more gradually. The camp is nearly rectangular, measuring about 160 metres by 200 metres.  Other cropmarks in the vicinity comprise slight traces of a possible pre-Roman field system. (More information from English Heritage)

The Friends of Thynghowe was formed in 2005 with members from the villages of Edwinstowe, Clipstone and Warsop. We are interested in discovering more about the history and ecology of the part of the Forest of Birklands centred on Hanger Hill, formerly known as Thynghowe.

More information about Thynghowe, Birklands and our ongoing research can be viewed on our website www.thynghowe.org.uk

By The Friends of Thynghowe