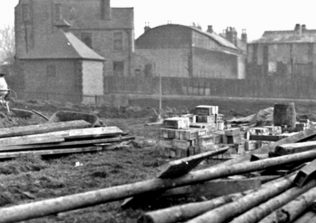 The Ebor bus depot, on Nottingham Road, is the building with a curved roof in the background of the image taken from the site of the eventual new Boneham & Turner’s factory in 1936.

I have been able to find some information about the Ebor Bus Company. Also I came across the name of one not previously mentioned – The Supreme Bus Company.

In 1931 the Ebor Bus Company had 26 Omnibuses – Arthur N. Annison was the managing director. Its Ripley route had started in 1927. In the previous year they had spent £16,000 on new omnibuses. In May, that year, they applied for a licence to run omnibuses between Mansfield and Alfreton, Ripley, Langwith, Ollerton, and Woodhouse. Objections had been lodged by the Notts. and Derby Traction Co., and the Midland General Co., but this had been withdrawn. Tram companies wanted protection in the event of their services being converted from tram to buses.

In the previous month a passenger bus belonging to the them was totally destroyed by fire near Ollerton one evening. A petrol tank had come adrift which was then dragged on the road for about 150 yards when it caught fire. The bus dragged the blazing tank for a further 50 yards before the flames reached the rear of the vehicle. The vehicle which was purchased new at Christmas, was completely burnt out. The six passengers avoided injury.

In July, of that year, they made an application to the East Midland Traffic Commissioners for a day trip to Blackpool. This was denied  on the grounds that the journey was too far to go there and back in a day. Whereas the Traffic Commissioners “On an undertaking being given that two drivers would operate the trip, a licence was granted to the Supreme Bus Company, Mansfield, for an excursion to Blackpool.”

In January, 1950, it was announced that  the Ebor company was selling out to the British Transport Commission which owned the Mansfield District Traction Co. Ltd. From March 25 1950 the existing time-tables, route numbers and fares remained unaltered.