You are here: HomenextTopicsnextAgriculturenextCrown Farm, Mansfield 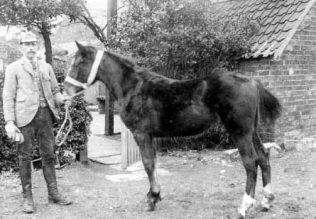 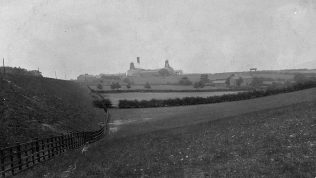 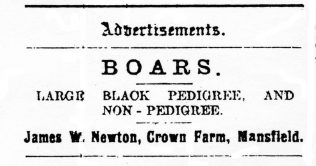 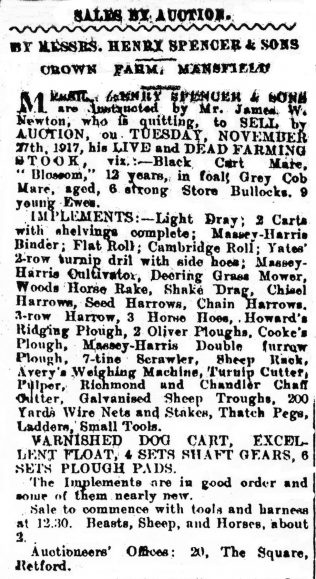 In the area near Eakring Road, where today the Mansfield Rugby Union Football Club is situated there once stood a stone farm building known as Crown Farm. The farm is understood to have been a tenant farm on land owned by the Duke of Portland of Welbeck Abbey.

Just when the farm was built is unknown but it was known to be there in 1861 when the census was taken. Through census returns, documents and oral history more has been learnt about this farm.

In 1861 Thomas Rolling aged 62 is listed as a farmer of 172 acres living at Crown Farm with his wife Hannah aged 55 and their son John 25 and daughter Mary 19. They have two servants William Slaney 18 and George Huskison 12 whose occupations are given as carter’s.

Thomas is still at Crown Farm in 1871, and he is listed as being a farmer of 200 acres. His wife is now named as Harriet but is still the same age as Hannah and born in the same place (Warsop) so is no doubt the same person as in 1961. The family have one female servant 18 year old Martha Taylor and two farm servants Benjamin Hinchcliff 20 and William Dring 15.

By 1881 the farmer is John Rolling 45, the son of Thomas. The household consists of John’s wife Jane 44, son Francis Samuel 18, son Richard 14, his mother Hannah 76. They have two farm servants William Cooper 18  and David Hooley 14. The farm is now listed as having 180 acres.

An 1887 map shows how isolated the farm is, surrounded by fields, moor land and areas of forest.

The occupant of Crown Farm in 1891 remains a mystery but by the time James Newton was living there in 1901 the wider landscape around the farm had started to change. The Bolsover Colliery Company were in the process of sinking the Mansfield Colliery, a colliery that soon became known as Crown Farm Colliery or ‘Crownie’ due to its close proximity to Crown Farm.

James Newton was the tenant farmer at the time Mansfield Colliery was being sunk. He was born into a farming family, and as a young man, served with the South Nottinghamshire Yeomanry. On leaving the Yeomanry around 1894, he took over the tenancy of Crown Farm.

His first wife Elizabeth (nee Hirst) died in 1909 leaving him alone at the farm with three young sons, Frank(1892), Leonard (born 1900) and George (born 1902), and daughter Lucy (born 1907). James was  remarried to Edith Fox and twins Frederick John and Edith were born in 1910, and William (1917). James and his wives are known to have had other children who died young. The isolation of the farm meant the children had a long trek to school either in Mansfield or Forest Town.

Despite the nearness of the new colliery, the farm still nestled among fields and was reached from the Eakring Road where a long dusty track with brick lined dew ponds on the left, continued towards a stack yard on the right. At the end of the track was the farm house which is recalled as having many rooms and being lit with paraffin lamps.

To the rear, separated by a wall, was the crew yard that had stables and a raised grain store. The farm implements were stored under the grain store. In the crew yard ‘mucking out’ was done, and the accumulated manure was eventually spread over the nearby fields. A dairy and a pigsty were among the other outbuildings.

To the front of the farmhouse, an earth closet was situated halfway down the garden.

Horseradish was just one of the vegetables grown in the garden. Damson and russet apple trees grew in the orchard, and there were fruit bushes such as gooseberry, red and blackcurrant, these added to the self-sufficiency of the farm. In the long field known as ‘the paddock’, cattle grazed, and wild rabbits ran about in the grass, the farm children would sit making daisy chains as they watched.

Around the farmyard, cackling geese strutted while a large gander was not always friendly to strangers. In the surrounding fields wheat, barley, mangolds and turnips were sown and later harvested.

In the Land Tax records taken in 1915 the acreage of the farm is given as 120 acres and describes as ‘A poorish forest land farm, moderate buildings & house with cottage adjoining not used.’ The Duke of Portland is listed as Owner and Jas. W Newton tenant.

During World War One it is recalled that the farm was used to house soldiers in conjunction with the nearby Clipstone Camp. Officers stayed in the house with the Newton family while soldiers were under canvas outside in the paddock

In November 1917 a decision had been made by James Newton to move out of Crown Farm and he instructed Henry Spencer to auction all stock and equipment pertaining to the farm.

Members of the Newton family Crown Farm moved out some time after this date. Frank the oldest son had emigrated to Canada a number of years previously, and in later years two other sons George and William also went to Canada.

The next tenants are believed to have been Thomas Rhodes and family who lived there for around 10 years.

Occupants of Crown farm over the following years are yet to be discovered and further information to this page may be added in the future.

From Agriculture to Sport

In the 1970s when Mansfield Rugby Union Football Club acquired the land sport took over from agriculture and a new era began.