You are here: HomenextTopicsnextArchaeologynextMajor Hayman Rooke 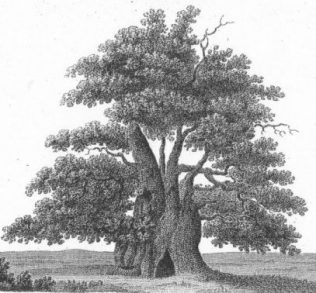 Little is known about the private life of Major Hayman Rooke who after his retirement from the Royal Artillery around 1780 took up residence at Woodhouse Place , which is still situated on the corner of Leeming Lane South and Mansfield Road , hiding behind a high stone wall, opposite the Mines Rescue Station.

Although he is little known by his name he is remembered in away that makes him known to millions of people the World over. During his residence in the area he would have become known as ‘The Major’. The Major enjoyed long walks especially through the woods. It is conjected that he often rested under the branches of the well known “Queens Oak” where he would perhaps have his lunch or write his notes. As time went on the locals began to call this tree “The Major’s Oak” and has since become known as “The Major Oak”.

During his retirement he became somewhat of an antiquarian, especially relating to matters concerning natural history and meteorology. His knowledge enabled him to become a Fellow of the Society of Antiquarians and a Fellow of the Royal Society. He wrote many articles and communications which were included in ‘The Archaeologia’ (vol’s 8-11).

He made many discoveries and observations both locally and further a field but possibly his most well known discovery was that made on land just west of Mansfield Woodhouse. During the spring of 1786 he had noticed some Roman bricks and small stones which the locals called ‘fairy pavements’. This aroused his curiosity and he commenced his search for their origin. This search didn’t take long and soon he had discovered the remains at a Roman Villa situated in the parish’s north field.

A small scale model of the villa has been made, and can be viewed at Mansfield museum, showing the living quarters, barns and the tessellated mosaic pavement, from whence the fairy pavements came from, amongst other buildings on the site. He later found a second villa near the site along with some sepulchres.

The owner of the land erected a shed in order to protect part of the discovery but it was noted in 1811 that the door had been broken open, the pavement ruined and a mare and foal were sheltering on the stones. The site was once again buried in order to protect it from vandals and the weather.

The forest was a great love of his and he studied many of its larger trees particularly in Welbeck Park . He proceeded to write a “Description or Sketches of remarkable Oakes in Welbeck Park” in 1790 followed by publishing a pamphlet nine years later entitled “A sketch of the ancient and present state of Sherwood Forest”.
The first work included such oaks as: “Dukes Walking Stick” which stood 111 feet high and was estimated to have weighed 11 tons; “The seven Sisters” being seven trunks issuing from one stool; “The Porters”, which stood either side of a road, one being 98 feet high and 38 feet around the circumference while the other stood 88 feet high and 34 feet around the circumference and the “Greendale Oak”, which had, in 1724, an arch cut through it large enough for a carriage and four horses to pass through.   Major Rooke describes the latter oak as follows: “This famous oak is thought to be above 700 years old, and from its appearance, there is every reason to suppose it has attained to that age at least. The circumference of the trunk above the arch is 35 feet 3 inches; height or the arch ten feet three inches; width about the middle six feet three inches; height to the top branch fifty four feet.”

His second pamphlet, published in 1799, tells how he discovered, upon the felling of certain trees in Birkland and Bilhagh, the brand of King John (about 18 inches beneath the bark and twelve inches from the centre), James 1, and William & Mary cut and stamped in the body of the trees. He describes how far each was from, the bark and from the centre.

He died in 1806 but his name, or rather his title ‘Major’, will live on for centuries to come whenever our descendents talk of Robin Hood, Sherwood Forest and the Major Oak.