You are here: HomenextTopicsnextUniformed OrganisationsnextBoys Brigade Festival of Britain Run May 1951 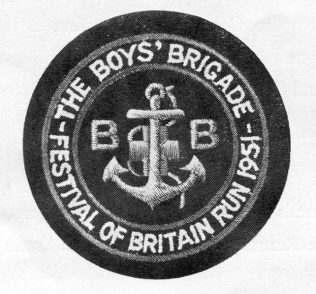 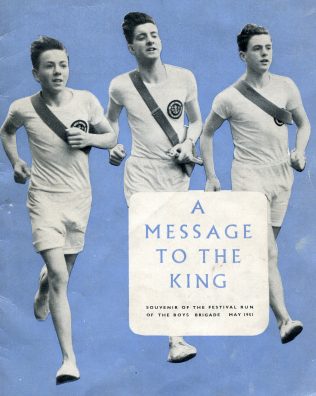 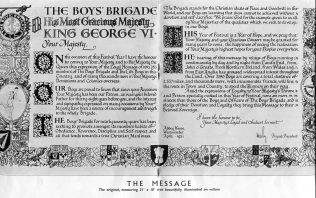 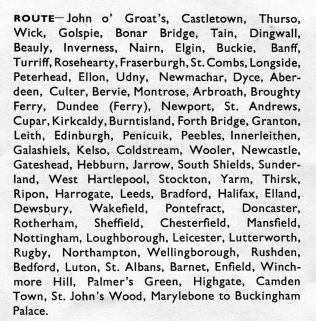 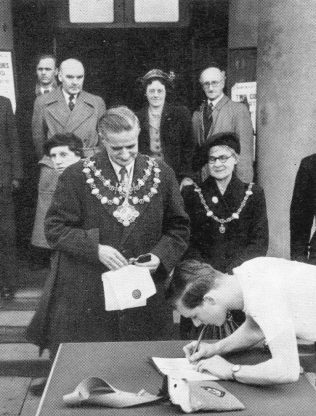 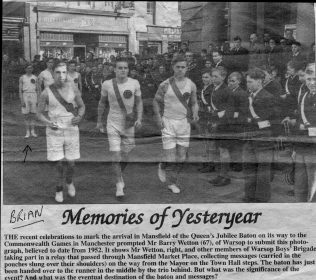 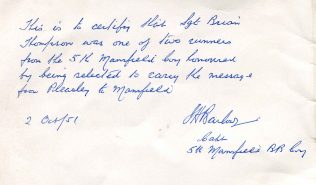 The Olympic celebrations this year and the carrying of the Olympic Flame by 8,000 people across the UK, encouraged Marilyn House to find this celebration booklet of a similar event in 1951, the year of the Festival of Britain.

An extract  from the booklet tells us:-

The avowed purpose of the Festival of Britain was “to put on show to the world, as a token of thanksgiving for her past and as a testimony of faith in her future”.

As an integral part of the national life,  The Boys’ Brigade decided to take the lead in youth Festival activities with an enterprise in which hundreds of cities, towns and villages could participate.

And so was born the B. B. Festival  of Britain Run, with relays of Boy runners carrying a Message of Loyal Greeting to His Majesty the King, Patron of the Brigade. The Message, contained in a silver Baton, was carried day and night on five Routes, by a series of Bearers, accompanied by two runners as Escort, each Bearer with the Escort covering four miles. Over 2,190 Runners took part, and they covered a total distance of 2,537 miles. In accordance with B.B. tradition, the Run was halted on Sundays and the Batons were formally deposited in the Town Halls , of Elgin, Harrogate, Liverpool and Torquay.

All along the routes there were Ceremonial Transfers as the Baton was handed over, and the Roll of Bearers signed in turn by every Boy who took custody of the Message. B. B. Guards of Honour and Bands were on parade and great crowds witnessed these ceremonies.

The first Runners set off on Thursday 26th April from John o’Groats on the Northern Route which was the longest of them all. This Route took in Mansfield. The other Routes started on 1st,  4th, 7th and 8th of May.

The run reached its climax in brilliant sunshine on the 10th May at Buckingham Palace, where the final Bearers and their Escorts handed to his Majesty the Batons which had been surely and steadfastly carried from the five corners of the United Kingdom.

Pictured signing the Roll of Bearers is Ivan Dickinson, a sergeant in the 1st Company Mansfield Boys’ Brigade. He is watched by the Mayor of Mansfield Ald., German Abott and other dignitaries. (Information from a news cutting).

The Memories of Yesteryear news cutting carries the words ‘ it shows Mr Barry Wetton, right and other members of Warsop Boys Brigade taking part in a relay that passed through Mansfield Market Place………   The Brian the arrow  is pointing to is Brian Thompson.

Inscription in the booklet certifying that Sgt Brian Thompson was one of the two runners from the 5th Mansfield Coy honoured by being selected to carry the Message from Pleasley to Mansfield. Signed J H Barlow Capt 5th Mansfield BB Coy

By Pauline Marples with acknowledgement to Marilyn House