You are here: HomenextTopicsnextReligionnextTransfer of Remains from Old Meeting House Mansfield 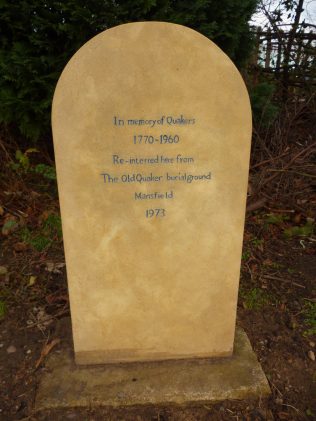 During 1973, the Old Meeting House and grounds were demolished to make way for a new inner ring road around the town centre.

Although the existing gravestones were removed to the new Meeting House garden, the remains from the graves were transferred to the Mansfield Community Graveyard.  Unfortunately, they were re-buried in an unmarked grave.

It seems to be a sad ending for those remains, of approximately 150 Quakers from the earliest 1700’s to the 1950’s, of citizens of this area.

A memorial stone has now been erected at this grave site, to commemorate these people and an additional list of all their names and details is in the cemetery office, as well as Mansfield libraries and the museum in the town, for any researchers to see.