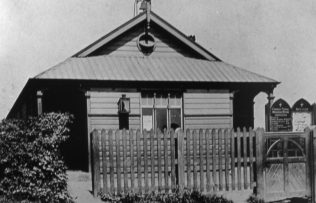 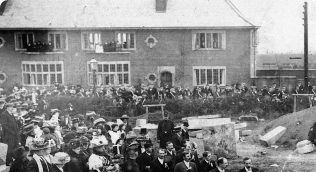 zoom
Crowds on the site of the new church. Forest Town Welfare Institute is in the background
Private Collection 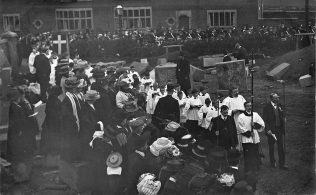 zoom
Members of the clergy in the parade
Private Collection 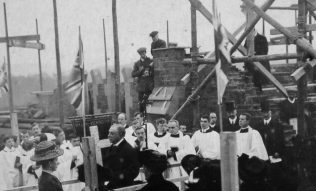 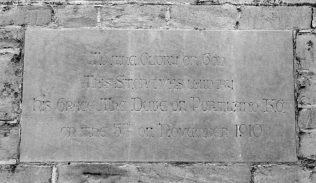 The event took place in the afternoon and the weather for the most part was ‘beautifully fine’ The people of Forest Town turned out en masse to witness the ceremony.

The foundations of the new church were laid in July and considerable progress has already been made with the erection of the building.

Guests and Guard of Honour

For Saturdays ceremony a platform has been erected at the east end of the building, the clergy and choir taking their places at one side of the enclosure, and specially invited visitors at the other, an open space being left in the centre for the speakers. The Duke who was accompanied by his agent, Mr T Warner Turner, drove up in his motor car and was received with a salute by the guard of honour composed of  150 members of Forest Town Boys Brigade, 80 members of St Johns Ambulance Brigade, 56 members of the Cadet Corps. The Silver Prize band was also present.

Alighting from his motor car at the mission room The Duke joined the procession of clergy, choristers and building committee, who walked to the site singing the hymn ‘Onward Christian Soldiers’.

Mr Ambler presented a silver trowel to his grace who laid the mortar and after tapping the stone with a mallet he declared it well and truly laid.

Speeches  made during the ceremony  were by the Rev. T Harcombe, Duke of Portland,  The Rev. H Bull gave a vote of thanks and this was seconded by Mr Davis.

At the conclusion of the ceremony the procession returned to the mission room, singing ‘O God Our Help in Ages past’. Subsequently his Grace inspected the brigades and cadet corps which were drawn up in the roadway.

Tea was provided for about 300 persons in the Drill Hall, and this was followed in the evening by a dance and social, the St Alban’s Glee Party rendering several pieces.