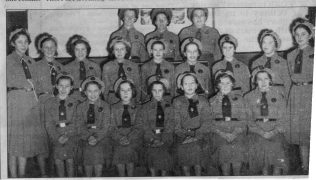 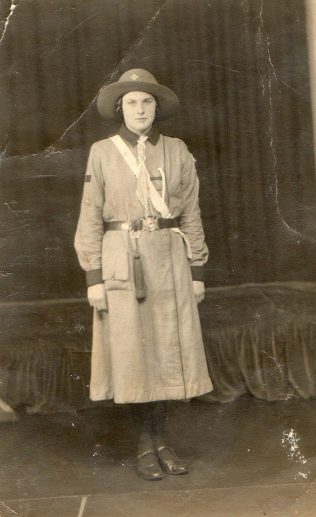 In 1955 I was asked by the Mansfield Salvation Army to set up a group of girls between the ages of 11 and15 years of age.These were the equivalent to the Baden Powell Girl Guides and were called Salvation Army Guards.

It was a very hectic but exciting time because fifteen dresses had to be made. The uniform was a grey dress with a red neckerchief,a leather belt with a metal buckle. The patrol leaders wore a white cord lanyard with a whistle attached

We differed from the Baden Powell movement in the fact  we could go to other Salvation Army Corps (churches) and take services  For instance whilst I was their leader we went to Parkhouse (Sheffield) and to Skegness where the girls paraded along the parade and Lumley Road. Crowds watched as the girls very smartly marched along. It was a really proud moment.

Various activities took place and the whole troop was  taught Indian club swinging.  We were really fortunate as Mr. Truscott made our clubs  so that, small batteries and light bulbs were fitted allowing us to give many illuminated club displays

Each girl had to pass the Baden Powell Guide Tests and these were assessed by  people not attached to the Guards.

I remember the Fire badge test was overlooked by Mr. Pepperday a Mansfield fireman who lived on TudorAvenueForestTown.

Marching smartly was very important and I recall marching in Nottingham  to loud applause and I was so pleased that not one girl looked to see what was happening they looked straight ahead.they were a wonderful set of girls.

When all badges had been attained the highest accolade was (instead of becoming the King’s/Queen’s,.Guideour title was the General’s Guard and if the General of the Salvation Army came to visit your vicinity it was the duty of the Guard to be present.

At the age of fourteen years I  became the owner of the coverted  red silk tassel of which I am very proud.

The picture shows me in my Guard’s uniform with the silk tassel which may give you some idea of what I have written about.I would love it if any of the girls in the picture would like to get in touch as I am ninety years old and have great memories of the time spent with these girls