You are here: HomenextTopicsnextLeisurenextThe Game of Pitch and Toss in Mansfield.

The Game of Pitch and Toss in Mansfield. 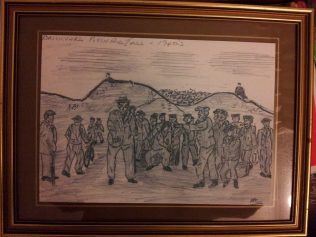 Like sport, most games of any description were banned on the Sabbath.  Sunday was a day of rest, or as we as youngsters were taught, for attending Sunday School. My first Sunday School was Saint Aiden’s  Church at the top of the Brickyard but I moved to the Salvation Army because I found out they gave you a Christmas Present. It was pretty near to Christmas!

The brickyard Tossing Ring as they were known, used to take place amongst the mounds that were left by the demolition of the old brickworks that at one time employed many local men. It is said that the closure was forced by the large chimney and buildings being struck by lightening. The only thing left in the area was the Brickyard Pond, which itself was eventually filled in with much of the towns business waste.

The Ring was a weekly meeting held in the Brickyard;  held on a Sunday lunch time to the rear of the Brickyard Club. Of course I recall the beer was only 2d a pint.

The pitch was overlooked by the highly built Saint Aiden’s church from the top of Victoria Street. The game was played in the dunes that had been left by the demolition of the brickyard works.  A level piece of ground had been left that made an excellent pitch to play the game. Some of the games had 40 or 50 men playing at one time. The game was so much so, one or two lookouts were paid ( probably with drinks afterwards). To keep a lookout for Bobbies who occasionally raided the ring. Keeping a lookout was locally called ” Keeping Konk “.

Pitch and Toss is/was a gambling game using the old style Pennies. probably going back to Queen Victoria’s reign , or even before.

The person whose penny was nearest the marker, places the six pennies along the palm of his open hand. They then throw their arm and hand containing the pennies upwards, and with a twist of the hand, flip the six coins into  the air, causing the six coins to spin. When the coins land on the ground , whatever coin lands head upwards, the person who spun the coins, picks them up . The next in turn does exactly the same with the pennies that showed tails up. And so, throughout the six players, they each take their turn until all the pennies have been depleted.

Of course, there would have been all sorts of side bets on how many heads would be showing when the pennies landed. Or, whose coin would finish nearest the marker. Don’t forget, these men would have been having their Sunday dinner time drink after working all week, many working down the coalmine . Many carried their drinks out with them, placing them on a brick or stone when it was their turn.

Returning home with the money they started out with would have been a good afternoon. If they returned home “in pocket”, they were happy.

The Brickyard Club was a sort of Working Man’s club, frequented by mainly men who had been working hard all week. They had Saturday night turns, mostly local would be singers.

I knew three of the Landlords, It was a GREAT CLUB.