You are here: HomenextTopicsnextLeisurenextMemories of Titchfield Park. Mansfield 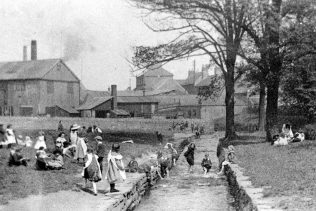 I bet most folk who drive past Titchfield Park, do so without giving any thought to the pleasure and enjoyment the park has given to the good people of our town over the years…Certainly to me as a child over 70+ years ago..

To the visitor to Mansfield driving along Notts Road, little would he know that he was driving over the river Maun that runs under the road and meanders it’s merry way through the park…What a lot of joy that part of the river has given to the people of Mansfield over the years, it would be my guess that every person in Mansfield has, at some time visited the fine park we have in our town..

Titchfield Park is, in shape, like a very large triangle, or if you like, it is the shape of a slice of a very large round cake…It is, like many other structures and buildings of that era, mostly surrounded by stone walls….All along the frontage to Nottingham Road is a stone wall.. Although I do believe that part of the frontage to Nottingham Road is/was protected by Iron Railings which protects the Flower gardens. I do have to add here that in the 18th /19th centuries, there stood on the park side of Nottingham Road, two/three stone cottages, that when they were demolished, the Iron Railings replaced the frontage to the Nottingham Road  side of the park….There is also a six foot high stone wall dividing the park from The Cattle Market.( I recall a doorway leading to the Cattle Market built into the wall,  never knew what it was for)…Continuing with the stone works in the park, the river Maun is lined both sides of it’s banks with stone blocks that are topped with stone pavings…There are also three foot bridges in the park that cross the river Maun….

The small gate entrance from Nottingham Road, for many years had Windsor Garage at the side of it, and through the gate, the park pathway ran alongside of the Railway Line embankment. The embankment also had a very high stone wall,  with very large trees either side of the pathway, making it a lovely walk along the tree lined park pathway…the other end of the parkway brought you out onto what is known as  Littleworth…The railway lines ran right along the side of the parkway, crossing both Nottingham Road and Littleworth by bridges..

As you walked through the small gate, you passed the Ladies and Gents toilets on the left, these were hidden by trees and bushes.. You then passed a large area of grassland where in the middle, stood the Bandstand. Many is the time I have sat and listened to the Brass Bands playing in the Bandstand on a lovely summers afternoon… Walking a little further , you came to the Children’s play area, an area that was most popular to the younger children. It contained two Sea-saws, a bank of children’s Swings , and at the side of the swings there were two high swing bars.

As you cross over the small foot bridge, you came to the Paddling Pools on the right…There were three paddling pools, two rectangular and a large semi-circle one…Although I have seen a very old picture of a time when there were only the two rectangular ones…At the front side of the pools was a very large grassed area,  on a warm day in the school summer holidays , one had to put their coat down on the grass to have a paddle and a picnic. Many is the time you could not find a spot to put your coat down…All these afternoon picnics were done on the cheap, and were a delight for the children..There was an overflow from the semi-circle pool into the Rectangular pool.. The river Maun was at the side of the pools, divided by some large rocks, it was at this point that one could fish with their fishing nets before the river Maun disappeared under the Mill at the bottom of Bath Street..The other side of the pools was an open fronted room shelter, not only did it give shelter to the park visitors when it rained, it was also idylic for  young couples in their courtship days…

As you walked along the paths that circle around the park, and along the side of the river, one appreciated the work that had gone into the lawns and flower beds to make the park such a beautiful place…In the centre of all this was the immaculate Bowling Green… Do not confuse Flat Green Bowling with Crown Green Bowling…Flat is where the bowlers use the straight lanes to bowl up and down the green on a very flat lawn…Crown Green Bowling is where one can bowl in any direction anywhere ,any way, and bowl across another bowlers lane , on a Green that has a crown ( hump) in the centre . I believe that the Park Keeper’s Office was attached  to the Bowling green buildings..

The park gardens and flower beds were always something to behold. There were some raised flower beds that in the centre of the square they formed, had a bronze statue of I believe was Peter Pan…Next to it was a drinking water fountain . The fountain had two heavy Goblets that were chained to the centre of the fountain, I know each one was a heavy cup goblet,  you pressed against a button and water came from the fountain and filled the goblet…It was often a life saver…

Along the lovely walkway paths one used to stroll, and when required, you could sit and rest on one of the many seats around the park, and if you had the inclination, you could stop and smell the flowers…

What a lovely part of our town Titchfield Park is…..