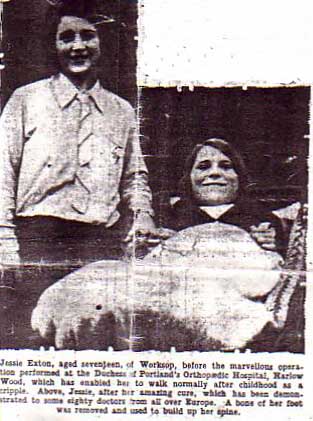 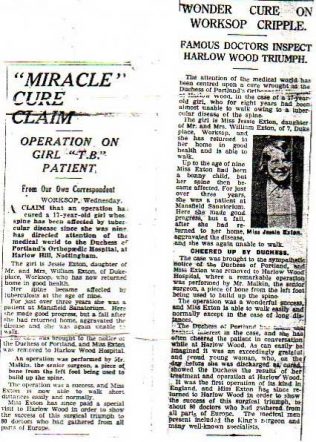 These newspaper cuttings tell the amazing story of how my great aunt Jessie Exton was helped to walk again after pioneering surgery at Harlow Wood orthopaedic Hospital in the early 1930’s.

Jessie born in 1915 was the daughter of Mr & Mrs William Exton of Duke Place Worksop. At the age on nine she developed a tubercular spine and lay on her back at home for around a year before going in the Mansfield Sanatorium.

She was there for three years most of which was spent lying on a frame. Jessie made good progress and was allowed to return home, but after trying to walk she had a fall which aggravated her problem and she had to lie on her back again, and be wheeled around in a spinal carriage.

Her case was brought to the attention of the Duchess of Portland and Jessie became a patient at Harlow Wood Hospital, a hospital the Duchess took great pride in and a real concern for the patients.

At Harlow Wood Jessie was operated on by Mr Malkin, the senior surgeon who grafted a piece of bone from her left leg and built up her spine enabling her to walk again.

After Jessie left hospital she said it was a great sensation to be able to stand on her feet again, and enjoy walking in the fields at the side of people who had previously pushed her around in a carriage. It was something she had dreamed of but never thought would come true.

This operation was the first of its kind in England and was deemed ‘A Miracle of Surgery’ warranting a report in a number of newspapers especially  when around 80 doctors from all parts of Europe came to the hospital to learn more of this success.