You are here: HomenextTopicsnextHealthnextHarlow Wood Orthopaedic HospitalnextChristmas in hospital, photos and memories

Christmas in hospital, photos and memories 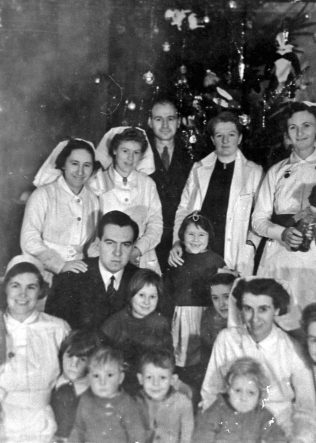 zoom
Staff and patients believed to be Christmas 1942
Private collection 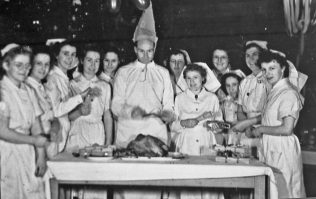 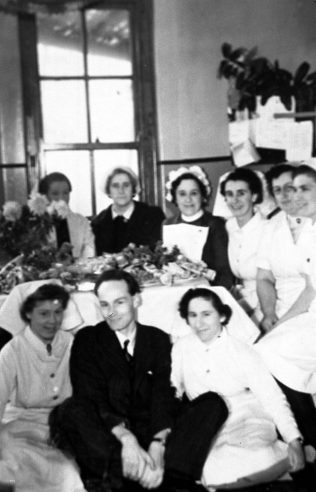 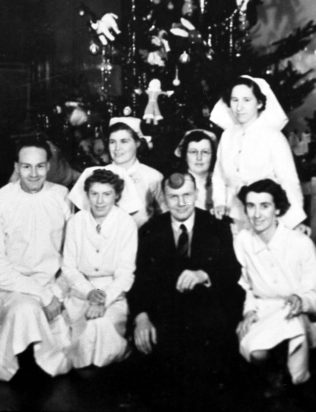 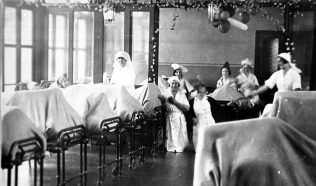 Over the Christmas period the staff in our hospitals today will do their best to make Christmas special for those patients who have to be in during the festive period. The staff may also participate in festive arrangements of their own.

I wonder how does today compares with the memories of former staff, and patients in Harlow Wood Hospital told to me many years ago and reproduced here in good faith.

…we put some good shows on at Christmas, Nurse Cooper was good at organising, we did reviews such as the ‘Siedfried Line’…we always devoted all Christmas Day to the patients NO ONE went off duty, they devoted time to the children made sure they had toys, filled their stockings for them… – Nurse Ringrose worked at Harlow Wood  1929 – 194?

…fresh air, we never had the doors closed, not even at Christmas when it blew down the decorations…we had a dance every Christmas… Mrs Briggs Worked at Harlow Wood  1930 – 1934

…we had lovely Christmas dinners, parties and dances, it was a problem finding extra boys for the nurses…the Wheatcroft boys used to come and arrive with roses wrapped in newspaper… Miss Custerson – Ward Sister 1949-1954 & Matron 1954-1969

…as it was Christmas, I had it all arranged to get two lots of presents from Santa Claus, one in Harlow Wood and one at home…I had some lovely presents in the hospital, one which was a Blue Teddy Bear given to me by an Aunt. I can still recall the pain I felt when I had to leave all my toys in the hospital… – ?

…Christmas 1960 we all had a timex watch and several other gifts, the children had Teddy Bears… – ?

My ward was females but being a long ward quite a number of small children occupied some beds at the bottom end, with no fear in their hearts they were always singing ‘I had a little nut tree nothing would it bear,’ especially over Christmas, until then I had never heard it.  – Mrs Hilda Cox patient 1943/44

We were only 13 to 15 years old at the time, on the boys side of Ward One, …At Christmas, their was a concert in the Recreation Room with Doctors and Sisters taking part. It was quite an occasion to be pushed down the corridors in bed to the Recreation Room. – A Cousins

It is not possible to name individually the many people who have contributed over past years to my information on Harlow Wood Hospital, they are all acknowledged. The original source of some documents and photographs are unknown, anything published is done so in good faith to share the information and keep the memory of this wonderful hospital alive