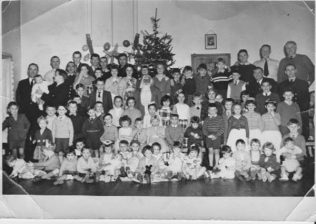 In the early 1960´s my Dad, Jock Denton(aka Alfred) worked as a fireman, eventually becoming a leading fireman and then the Station officer at Mansfield Fire Station, Rosemary street and I might add a great believer in the FBU.

My sister and I had such a great time as fire brigade kids. The wonderful pantomimes put on and written by the men themselves. The great social events and parties,  jumble sales and charity work. The massive snooker table, that we couldn’t and shouldn´t touch…..being shown how to come down the pole! (oh deep joy)

My favourite will always be Christmas when Santa Claus arrived on one of the fire engines…… wow!!! The tables laden with jelly and cakes….. lots of presents. Nothing has ever taken the place of that entrance and I will never forget it.

I was visiting Mansfield as the old station was being pulled town, as it should be……..  but also I was very sad to see it go. I´m glad to see a new station has arisen and that new kids will get the joy we did.

I´m including an old photo that Ive found in my Dads things. My dad isn´t in it. I´m in the front row with a cornet hat on and an ice-cream cornet clasped in my hands, covered in ice-cream. My Sister is 5 kids to the right, more interested in her new toy than any photo. Is that Michael next to her? and who was Shakespeare? He seemed to be very funny and loved us kids…