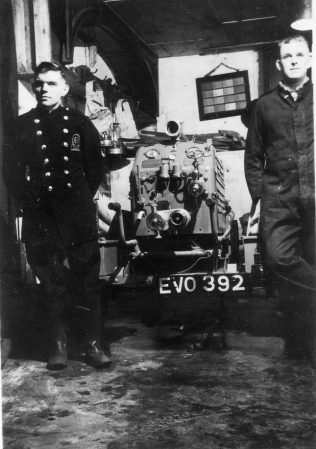 Today when we see the large red fire engine’s that are housed at the fire station on Rosemary Street in Mansfield, it is hard to imagine that at one time some villages had their own smaller fire appliances. An article and photograph in the Forest Town Crier community newspaper – March 2006 by Tony Armson, revealed that Forest Town was no exception. Read on:-

‘Yes, Forest Town had its own fire station way back in 1940, it was a wooden shed with a Coventry Climax Pump and that would be pulled by a lorry or car. The photo shows two firemen, on the left in the uniform is Mr J Armson my father, Mr Ernest Ingham is on the right.

The fire station was in woodland on Ellesmere Road, the doors faced Linden Road.

I remember visiting it once when I was five year old. My mother told me the men on the other shift were Mr Pollard (Builder) and Mr Cupit (Grocer).

By Pauline Marples with acknowledgement to Tony Armson