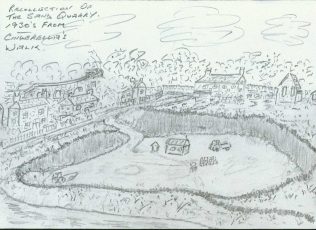 I only know one person who will remember this Quarry…Unless of course there is someone still around who lived in the Bradder Street/ Sibthorpe Street areas, and is a well into their 80’s…I must have been very young when I first saw this scene, for it has stuck in my memory ever since…But mostly I remember the Quarry being filled in…To my mind there were only two sand quarries which Quarry Lane lead you to…The first one being to the left of of the lane, under the railway arches, then over the river Maun and then under the second railway line that first crossed Quarry Lane , continuing on and over Nottingham Road…The second one being the one in the sketch above…The entrance to this quarry was halfway along Sibthorpe Street, stretching as far as the backs of the houses on Bradder Street…This quarry, although on the small side, had everything required for success, it had Railways for transport, Manpower on hand for employment, and Brickworks over the railway as a customer for the sand…

The sketch is drawn as one reaches the top of the  only small incline on Cinderella’s Walk. Or as used to be…I suppose it is worth noting there were no railings or barriers separating the drop into the quarry in those days…Along the left we have houses that were on Sibthorpe Street, and in the distance is the second viaduct.

At the bottom of Sibthorpe Street is Quarry Lane, the other side of which runs the River Maun… Centrally is the pair of Semi’s , the one on the left was the old Slaughter House…We then see the old Scout Hut with it’s pointed roof….Next to the Scouts Hut, was the old wooden Social Hall…

When the Sand Quarry was ” Worked Out of Sand” . The old quarry was filled in with Hundreds of Lorry Loads of Waste and Rubbish..

When it was completely full, all the waste and rubbish was covered over with ash, and soon became a “Tip”. Hence the name.

It remained a tip for a time, and soon after the War started, it was chosen as a place to store ammunition…A compound was formed by building a Six feet wire meshed fence all around, and adding another foot of barbed wire on top. it kept everyone out.. Nissan Huts were established on the site,and presumably housed the ammunition, for it was manned night and day , being patrolled at night time by guards..

It is now a vibrant industrial estate.     alan curtis