You are here: HomenextTopicsnextBusinessnextIndustrynextPenford's Mill 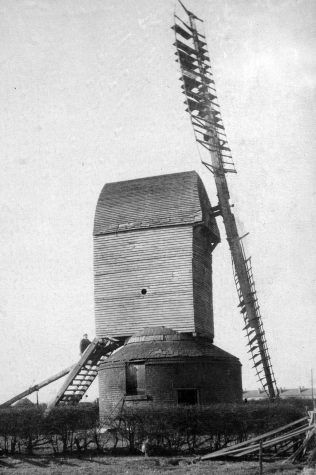 This mill stood on the corner of Skerry Hill and Carter Lane.  It is a post mill and was called this because the whole of the upper timber building pivoted on a centre post. This meant the miller was able to turn this part to face into the wind, using the tail pole which can be seen just behind the steps.

The round brick building was used for storage and may have been added later.

The last miller was Mr Penford and he worked the mill from 1844 to 1881. Once it was no longer used as a mill the wood from the centre post was used as pannelling in the Old Meeting House.