You are here: HomenextTopicsnextBusinessnextIndustrynextMansfield Drinks 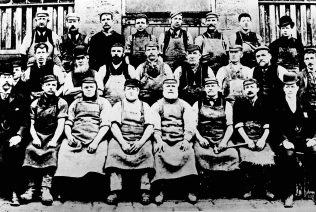 Since the early middle ages monastic organisations, manorial lords and the local taverns were brewing their own ale; a practice which continued well into the Victorian era, especially amongst the Landed Gentry. From the early 16th century much of the strip farming system was abolished in favour of small enclosed fields. This method of farming enabled the viable production of crops in order to turn farming into an industry. Since Mansfield was already known for its fine production of Malt several local farmers took this new opportunity to grow barley on a commercial basis.

Malt is made by kiln drying the sprouting barley. Not only was it important for the finest husbandry skills to be employed but it was said that the success of the Mansfield Malt was largely due to the coals used in the drying kilns. The coal was mined to the west of Mansfield in such nearby places as Blackwell, Huthwaite, Teversal, Selston and Pinxton. The Malt was then sent out to such places as Nottingham and Derby on the backs of strings of pack horses.

One of the earliest recorded Maltings was known to be on the site of the Ram Inn on Church Street , using water from the Lady brook which passed by on its way to the river Maun. In 1614 this malt house was purchased by Henry Heath who was the landlord of the Talbot Inn.

It was said that the local coals gave the malt a much sweeter taste than was usual and that it had none of the objectionable flavour found in the best Yorkshire Ales. The industry grew rapidly until throughout the 17th and 18th centuries it became the town’s major industry. By the year 1800 there were 39 Maltings within the parish of Mansfield, most being in the town centre, many of which were constructed on the sites of old barns and were not particularly big in size. The floor size being about 5 x 30 metres.

By the latter part of the 18th century one person, William Brodhurst, had built his business up so well that he was described as “probably the largest maltster in England ”. Around this time he built the towns largest Malting, probably on the site of a 16th century malting, on Blind Lane (now Midworth Street) which is still standing. He also purchased Gilcroft House which was a fine mansion standing only a few yards away from this new malting. Mr Brodhurst also owned maltings in Newark .

It was Mr Brodhurst who invented a much improved malt house by adding sliding doors to the apertures at either end of the kiln in order to regulate the draught and heat of the external air being admitted, being necessary for the drying of the malt.   Typical of the industrial and agricultural revolution large business now began to establish themselves to the detriment of the smaller cottage industries. Although the towns output of malt continued to grow the number of business enterprises diminished, as can be seen from the following figures:

After studying a survey of 1824 there were 28 Malt Kilns found in Mansfield along with nearly 20 Brew houses, most of the latter being connected with one of the local inns or taverns.

In 1855 the Mansfield Brewery Company was established by William Bailey, Samuel Hage and John Watson. John Watson was bought out the following year by the other two partners. In 1863 Bailey & Hage set up a malting company to supply their brewing business. In 1868 another major malting business was set up by Shacklock & Titley, associates of the Mansfield Brewery. In 1877 Shacklock set up a brand new malting house/business, with William Jackson Chadburn, on Grove Street , which remained in operation until it was burned down in 1930.

By 1900 the Mansfield Brewery, and associates, had totally monopolised the malting and brewing industry in Mansfield . With William J. Chadburn at the helm it went from strength to strength. The company in fact reversed the centuries old tradition of where a tavern brewed its own ale to the brewer now buying public houses to sell its ale. Between 1885 and 1900 the Mansfield Brewery purchased 50 public houses. By 1900 the original plant was producing 50 barrels a day however by 1907 the new works were producing 650 barrels per week with the capability of over 800 per week.

It wasn’t until 1918 that a qualified brewer was appointed, S. C. Deakin. He established the quality of the products. In 1975 the company launched its own draught larger ‘Marksman’ but was not too successful at first but after a re-launch in 1982 it won prizes as being the countries best larger in 1983. Mansfield Brewery closed its doors in 2001 and the site has since been raised to the ground apart from a few remaining buildings.

The manufacturing of Mineral Waters in Mansfield , on a commercial basis, can be traced back to the 1870s. However it is likely that certain mineral waters, such as ‘Ginger Beer’, were produced much earlier on a non-commercial basis.

During the 1870s we find Henry Powell as the landlord of the Ram Inn on Church Street and his brother Charles as the landlord of the Brown Cow Inn on Ratcliffe Gate. In 1877 Henry entered a second trade; that of manufacturing Ginger Beer. He set up this business on Bridge Street . Soon after its establishment his brother Charles joined him. In 1883 these two brothers decided to concentrate all their efforts into this new thriving business. To do this they moved to better premises on Clumber Street , where the business stayed until 1964. Here they both manufactured their own drinks and distributed other manufacturer’s products.

In 1886 the partnership between the Powell brothers was dissolved; with Henry carrying on the business and Charles returning to the Licensee trade. In a trade directory of 1888 we find the appearance of a rival manufacturer: Horace James Mettham who set up a similar business on Queen Street . By 1900 Horace’s brother, Bert, had joined the business. After a fire at their factory the two brothers set up a new manufacturing plant on Dame Flogan Street in 1902. By 1907, although the two brothers were still working together, Bert opened up his own factory at 85 Union Street , but they parted company within a few months. Henry still carried on the business on Dame Flogan Street while Bert operated from Union Street .

In 1914 Bert sold his business to W. Hornby who operated under the name of ‘Mansfield Mineral Water Company’. The following year Mr Hornby bought out Horace’s business, closed down the Union Street factory and ran the new business under his own name from Dame Flogan Street . This business continued in these circumstances until its closure in circa 1959.

A third major player was also to emerge on the scene, that of Robert Lewis Jones. In 1895 he was operating as a Wine & Spirit Merchants on St John’s Street . This became a thriving business, which by 1912, included a beer, wine and spirit bottling plant. He was now supplying 26 public houses. In this year his own brand of Scotch whisky, ‘Black Isle’ (named after his own race horse), won a Gold Medal. It wasn’t until the 1920s, during the start of the depression that his son, Rex, introduced the manufacturing of ‘Soft Drinks’ and concentrated fruit juices. In order to incorporate this new business a new factory was set up in St John’s Place . From this time forward soft drinks gradually took over the business.

Although Powell’s and Hornby’s businesses remained successful for many decades, R L Jones soon came to the fore, going from strength to strength. They bought up, between 1925 and 1975, 11 other companies throughout the Midlands , including Burrows & Sturgess whose origins go back to 1850 when Christopher Pritchard established a Ginger Beer plant, selling to ‘passers by’.

Mansfield Brewery also went into the manufacture of Mineral Waters in 1933 but to no great extent until they bought out R L Jones in 1977. By this time Jones was producing nearly five million gallons of soft drinks per annum. They had recently moved (1975) to a new factory on the Bellamy Road Estate in order to incorporate added production after the closure of their Derby plant. The name of Mandora had been used since the 1950s as a product name but after the latest take over this name became the new trading name.

Mansfield Brewery sold Mandora for 21.5 million in 1988 to A G Barr plc. At that time the company employed 400 people. Barr’s operated on 18 sites throughout the United Kingdom and are associated with such names as: