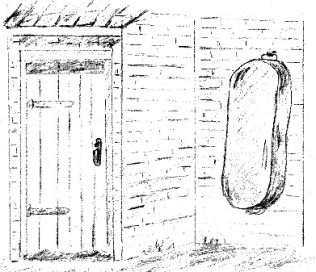 zoom
Sketch of outside lavatory door, and tin bath on the wall
P Marples, drawn for my book 'Forest Town the Village that Grew Out of Coal' 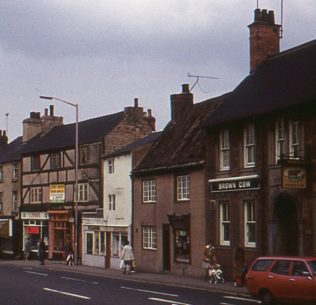 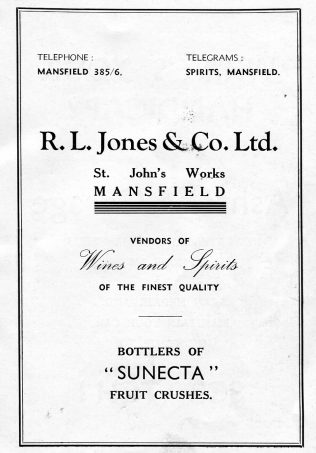 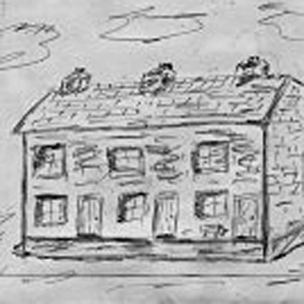 zoom
The houses as I remember them
A Curtis

Wood Court was a long forgotten part of Mansfield that only a few of the older generation may just remember. How do I know ? Because my wife’s family were part of that small community that lived there, or for want of a better word, existed there. My wife and her eldest sister Jean were born there. The entrance to the court was on Newgate Lane opposite Newgate Lane school field.

Wood Court consisted of 12 stone houses, attached in three’s. They were in three blocks. Two blocks of three, one  of them on the front on Newgate Lane,and the other block of three was the far side of the court. The third block was a block of six back to back stone houses all joined together, as per a six on a domino tile, both facing away from each other. Cobblestones covered areas around the court.

Close by was a piece of spare ground where the occasional bonfire was held on November the 5th. There was a second opening that came out near Jenny Wright’s steps that went down to Ratcliffegate. The houses were all built of the same stone that the Kings Arms Public House was built. And as my wife says ” All of the men who,lived in Wood Court, like her father, were drinkers.”   They frequented the Brown Cow, Kings Arms, the Carpenters Arms, Sandhills Club, and many more they could get into.

The stone houses all only had a front door. No back door. The stone houses all only had two rooms,one up one down. The stone houses did not have an inside toilet or even a cold water tap. Just in case the younger generation do not believe, or cannot imagine what it was like to use, and share an outside toilet, they were called lavatories back in the early days. I make no apologies for telling it how it was. When the houses were built, the lavatories were built away from the houses. They were built of stone, a very cold and small  room. The actual toilet was a wooden board across the back of the room, and the wooden board had a hole in the centre which formed the toilet seat. At the rear of the lavatory building was a small door, this door gave access to beneath the lavatory seat where a large container bucket would be placed.

These buckets would be collected and replaced with an empty clean bucket. This work would be done during the night with a horse and cart, and later with a slurry lorry…Before the invention of the sewerage works, the slurry wagons would be emptied on farmland  where it would be ploughed into the fields. There were no rolls of toilet paper in those days,  when one used the toilet, the paper consisted of the previous days newspaper which had been cut or torn into squares. And was usually hung on a nail or piece of string at the back of the door.  The stone houses did not all have a kitchen or sink.

As often as not, a tin wash basin was used, and a tin bath which everyone in the family used, this was mainly used every Friday night. The stone houses did not have a garden. There were some outside taps for a water supply, and each house had a fireplace, this had a boiler for heating water and an oven for cooking purposes, and there was a gas mantle for light downstairs. I believe my wife’s family lived at number two, and their front door looked onto the Kings Arms back yard. It must have been like living in the Rock Houses, plus having an upstairs bedroom. When Doctor Burgess first came to Mansfield, he had one of the houses on Newgate Lane, not to live in but as a surgery.

It was just round the corner where the families would get their weekly shop, or daily shop as the case may be.The shop was on the corner of Arthur Street, originally it was Hayes shop, and then it became Barkers shop. The shops in those days were very different from the modern day supermarkets. Bacon would be cut into slices by a hand operated slicing machine. Sugar would be put into a blue bag with a scoop from a big hessian sack of sugar and weighed. Butter would be taken from a large block of butter with wooden spatulas, and patted into a small block. Whilst the shopkeeper was doing all this, one would pass the time talking and looking round the shop to see if there was anything else you required or took your fancy.

During the war, Jack Barker was in the R.A.F., and during one of his many raids he was shot down, and although he lived through the crash, Jack did lose one of his legs. After the war, Jack and his sister Betty took over the shop from their mother and father, and continued to run it very successfully. Jack continued to deliver groceries to the same people whom his mother and father supplied at Wood Court, and who had all moved up the hill to Maltby Road. When my wife and I were married in 1955, we also continued to support Jack and Betty by buying our groceries from them, they were such nice people and neither were married at that time,   Jack would deliver our groceries each Friday in his Volvo car. I cannot recall if the car had been converted for Jack to be able to drive it.

It was in 1935-1936 that all of the families who lived in Wood Court were moved up to Maltby Road as the new houses were completed. What a difference that made to their  previous standards of living, and when they were all settled into their new abodes on Maltby Road, the community of Wood Court remained very good friends for many years. The men drinkers had now changed their watering holes to the Smith Street club, and the Reindeer, but still remained members of the Sandhills club. They   all saw their families grow into adults, and now all of the originals have passed on.

I guess the reason that my wife’s mother became a resident of Wood Court was that her mother, Lucy Powell, was the caretaker of the Clinic on Ratcliffegate. The large Clinic building was the main clinic for all the Mansfield Schools in the area. It dealt with all the schools health problems, including Dentistry. And if my memory serves me right, the Dentist was a Mr. Sutton. Lucy and her daughter Elizabeth lived at the clinic. In fact it was whilst Elizabeth was living at the clinic that, when she was coming out of the clinic gates one day that Victor Maclaglen [film star]knocked her flying….He did pick her up from the ground, and was full of apologies. Victor had been visiting his sister who was the wife of Doctor Tweedy. [See page on Dr Tweedie, in People].My mother in law was married from the school Clinic in 1933, and had a photograph taken on the lawn at the front of the Clinic.

Wood Court was finally demolished in the late 1930’s and lay as waste land for many years.It was the Mansfield company of R.L.Jones, the soft drinks makers, who finally took over the waste land and built a soft drinks depot there. I’m sure it was sometime in the late 1950’s that this took place. Now this, I’m not quite sure of, but I do believe that it was in the mid-1970’s that the R.L.Jones depot was closed, and the depot was taken over by another Mansfield company Pegg’s Transport.