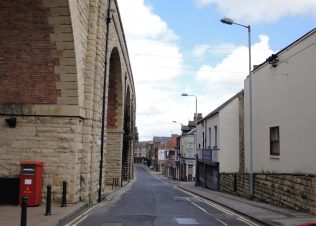 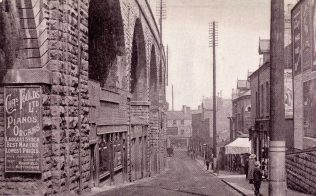 As we reflect on the differences in these two pictures, one taken possibly around 1909, the other July 2009, it is also worth considering how they were taken.

For the early photograph, the photographer would have had a heavy wooden tripod with a large camera mounted on it. He would have to wait to see the image he had taken until this was developed and printed. Prints or postcards would have been made from the negative/glass plate and have been sold in local shops etc. The process from start to finish would have taken a number of hours even days or weeks. Fortunately some of the early postcards have survived enabling us to see what this area of Mansfield looked like many years.

By comparison the coloured photograph taken in July 2009 with a digital camera and the photographer could instantly see the image taken. Within an hour or two the image had been downloaded on to a computer and placed on this web page. It is now there for people far and wide to view, hopefully for many years to come.

It is worth reflecting that at the time the early photograph was taken it was steam trains that travelled over the viaduct, today it is diesel trains we see on this bridge, which is now as part of the Robin Hood Line.