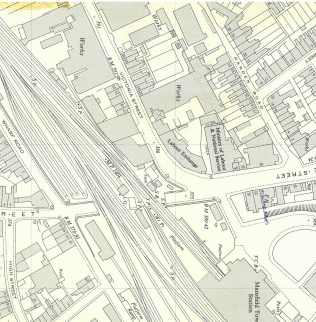 I am of the opinion that Victoria Street is the most underrated  street from my time of growing up in Mansfield. The street, as with anything else with the name Victoria, is  linked with Queen Victoria. It is a street that, with working six days a week, I walked up and down at least twice a day. Before that, I went to The Salvation Army Sunday School when it was on Belvedere Street at the corner of Peacock Street. It was from here the Salvation Army Band would start their march into town along Stockwell Gate, to perform on the market square. Also on many occasions, they would appear on streets, where they would form a circle and strike up a brass band sound of beautiful hymns, all this whilst two of the Salvation Army members were walking round the street , knocking on every door  and shaking their wooden collection boxes..

At the junction of Princess Street and the old post office, right at the bottom of Princess Street was a piece of waste land, what we used to call,  spare land.  A deal must have been done with the Salvation Army, the Council, and another Company. For the Salvation Army had a lovely new building to move into, built on the spare land,  which must have built during the late 1930’s or early 1940’s. I believe it was an engineering, or plumbing company that moved into the old Citadel if that is the right word.

Funny thing really, Victoria Street, I believe, is the only street I know who’s length stretched over two different named streets, having the same name.

The bottom part of the street, nearest to the town centre, was, and maybe, still is, called  ” Old Victoria Street “.  Ending at what used to be Platt’s Post Office on one side, and two old type houses on the other. Just wondering if they are still there ? For behind the two houses was the old Co-op Dairy and Warehouses.  Having lived on  Bradder Street for many years , I have never found out what the unmade road from the bottom of Princess Street and the footbridge over the railway lines was called, I’m not so sure it ever had one. I know that whenever you passed along it in the early morning, the old Co-op Shire horses would be there along with their carts and milkmen drivers, loading up with their daily loads of milk, ready for their daily delivery rounds.

At the bottom of the footbridge steps on the dairy side, there were two gates, a single gate that lead to the railway lines and sidings,  It also lead to the old Signal Box. There was also a double gate which was the entrance to the big old house that stood proudly in it’s own paddock, much like an old farmhouse would have stood.

The right hand side of this unmade road, was the rear yard to the shop on the corner Princess Street.

From Platt’s Post Office,  Victoria Street did a right turn , where the name changed, becoming New Victoria Street. Within a hundred yards, it was here the road did a left turn, continuing as far as the old Brickyard.  So there you have the same street with two names. All this of course was well before the intervention of todays postcode addresses.

The houses on New Victoria Street, were the run of the mill brick built terraced houses on both sides, with a small row of shops on the bottom right. On the right of the street, was the junction with Moor Street. Right at the top of the street on the left stood Saint Aiden’s Church.

OLD Victoria Street was a different kettle of fish.The main railway lines ran to the rear of the street and into the Station. The lines running  behind the old stone houses and factory of Whiteley’s Radio, who employed hundreds of workers at the time. If you were walking into town down the street, all the buildings past the two brick built houses and the Co-op Warehouse on the right were built with local stone.This always made me wonder what it must have looked like when there was only one side to the street, with everything built with stone. There was about half a dozen old stone cottages, which I would say were built back to front of the street. The frontage of the houses to the street had a six foot high stone wall with two entrances in the high wall for access to the yards,which  I believe to be shared , there  were toilets and coalhouses built in the yards. There was also a gennel leading to the far side. The front doors and small gardens were facing the railways. I knew, and went to school with some of the families who lived in the cottages.. I remember the Chadburns, the Widdowsons , the Dixons, and Miss Burney, a teacher at Moor Lane School . Further down towards town, past Whiteleys, and if my memory serves me right , attached to the Whiteley’s  Factory, were 3 or 4 stone cottages, of which my wife’s Aunt Doris lived in one. The very high stone railway wall continued to Belvedere Street and round to the double bridges. Before the commencement of the Ring road, unlike today, one could drive down Old Victoria Street and onto Belvedere Street.

There is just one more point of interest,  and that is the cinema that was at the junction of Old Victoria Street and Belvedere Street, a cinema believed to be Mansfield’s first. The only thing I can tell you about this is, when I was a youngster in single figures,  I went there to see a Cinematograph show – an evening of still slides It was in the 1940’s the Cinema became the British Restaurant.

I’ll take you back up to the top of Old Victoria Street starting again at Platt’s Post Office, which, during the war, played a big part in dealing with the war time Saving Certificates. Next to the Post Office there were three shops, one being a Barber’s Shop. Then an unmade road which  belonged to the Co-op, there were several  places of work situate on this road . I can recall as a youngster taking a bag to buy a bag of sawdust for my rabbits for 6d. It was the first unit on the right, and the next large unit belonged to the Co-op. It was  the workshop  where Mechanics serviced the horse carts and later the vehicles.  Just a little further down the street on the left, there were two  small inlets of terraced houses that faced each other, with gardens in the centre. The end of the first there was a shop, run by a lady by the name of Mrs Steel, who always had a PARROT outside on a perch. Everything on the left of the street was brick built, which, after the houses was a very large extension to the Whiteley’s Electrical Factory. This extension had a very large high chimney to it’s forefront. The gates to both of Whitley’s Buildings faced each other, and one could often see workers crossing the road to one or other of the works.

Probably the most important building ever to be built on Old Victoria Street was the next one, The Labour Exchange. Or as it was more commonly known, The Dole Office. It was a place you had to visit to sign on. A place you went to find work .  It was also where, on reaching the age of 18, men had to report there for Call Up, to the Armed Services. Call Up ceased in 1962.