The Hut on the Tippin. 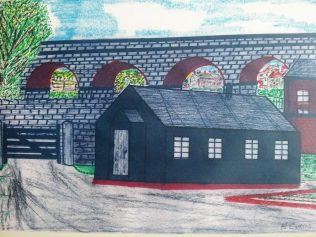 Someone ask for information about the hut on the Tippin , situate off of Quarry Lane.

So I have drawn up a sketch of how it was all those years ago. At least very much how I remember it.

It was after the first World War , the rot set in for the workers. Men would set out early morning to look for work, any kind of work. Anything that would pay a few shillings, or even pennies that would help feed the family. It seemed that the areas that were called a street , in the main was known as a poor area.  Times like those must have been devastating for any of the poor families. Often the men folk , if returning home at the end of the day, with no work, and no money for food, would take it out of the kids. I know this to be true, learning it from my first sister who was taken from our family when born out of wedlock. She actually wrote a book about her memory experiences , but that is another story, alas she too has gone.

One of the first things noticeable that had not altered ,was the fire stove stuck in the centre of the hut. When it was cold weather, I can assure you the fire was the first task to be done.  Unlike The old huts, this one had been fitted out with easy chairs, kitchen , tables, sports equipment, and gardening tools for the allotment surrounding the hut.

The stone wall had two opening gates, one large and one smaller for pedestrian use. I’m unsure of what the larger of the two gates were used for, but I would guess at Horse and Carts , or even rail trucks from the old Sand Quarry.

The home from home fittings in the hut , as I’ve have mentioned before, leads one to believe it was used by out of work men, during the 1920’s.. after the First World War and long afterwards , for I can remember the hut being in use during the late 1930’s and early 1940’s.  I recall seeing men tending the allotments and ladies doing some kind of work in the hut.

It was with sadness that I recall being on the tippin one day when there had been a very heavy fall of snow. Seeing the roof of the hut had collapsed in the center of the hut, under the weight of the snow.   I believe it was considered too much to rebuild the damage caused, plus, the old hut, which must have had a great history , was not getting the use it was before.

There can only be a handful of folks who remember The Hut On The Tippin.

Just to add, the wooden hut is not to be confused with the brick building that I believe is still standing.