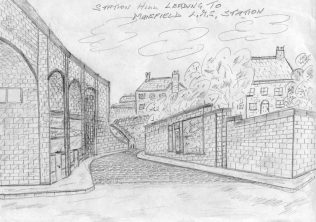 I don’t have any photographs of Station Hill, Mansfield. Therefore I have dug into my old memory box to conjure up a rough sketch of how it was when I was a youngster back in the 30’s and early 40’s. As you will see I am no artist, and the drawing is not to scale, It is purely to give the younger generation an idea of how it was in the days gone by. The road to us was always Station Hill, because which ever way you approached Mansfield L.M.S. station, you had to go uphill to get to it.

The two shops under the first two arches belonged to Hameyer and Copelands Hardware Shop. At the top of Queen Street, Hameyer and Copeland used the two shops as visual warehouse storerooms. I remember having to go inside one of the shops to collect a wheel barrow I had bought from them, and wheeling it all the way home. I must comment on how smart the employees behind the counter looked wearing their dark grey smocks with pencils in their top breast pockets. What a first class shop it was !!!

Further along the road, on the left was the very steep pathway that cut the corner off of the winding road that circled the station and the Midland Hotel. It had two bollards at each end of the pathway. As you got older, you were able to ‘Dob them’ if you were brave enough! The steep path was no problem when going into town, but one heck of a climb going home with arms full of shopping. This procedure was a regular trip for anyone living on Bradder St., Victoria St., Moor St., and Princess St.

The cobblestone road went from the junction at the top of Market St. and Queen St., up and over the hill, past the Midland Hotel and the Midland L.M.S. Railway Station, and down the other side to the junction with Victoria St. Portland St. and Belvedere St.

The old station had large double folding doors at the front entrance, and two double doors either side of the building. Inside the front doors, was the ticket office, left side for buying your ticket to travel, and a wider opening where your tickets were checked when completing your journey and leaving the station. Just inside the front doors there was a red ticket machine where you could, for the price of 2d, purchase a ticket that would allow you to go on the platform of the station to meet people off of the train. This of course was called a platform ticket.

Across the road from the station was the Midland Hotel, I recall the Landlord having a fine collection of clocks. The clocks were everywhere, on walls and shelves, wherever you looked there seemed to be a clock. What a time he must have had winding them up, nevertheless, people would go in for a drink just to look at the clocks.

To the rear of the hotel,and across the cobblestones was a pathway that lead you to Quaker Lane.( down hill again ).

In the very early days, horses and carriages would take and collect train passengers from the station. Later it became a bus terminus. One could board a bus there if you wanted to go to Newark, Nottingham, Rainworth, Blidworth and Southwell.

To the right of Mansfield station was a medium sized Goods Yard. In the early years of the 20th century, nearly all goods were transported by rail. I guess the terminology “Box-Car” came from the railway ” Box Carriage” where the goods were stored for transit. Another very big railway Goods Yard was at the top of, as the name suggests, Wharf Road. Wharf Road is off of Portland St. and opposite the top of Station St. There were many sidings in the goods yard, for at one time, trade in moving goods from one place to another was very profitable for the rail companies. The yard was always full of goods, so much so that the yard had to be policed night and day, as there were so many attempted break ins.’ More than one person was sent down to Lincoln Jail for six months.

It was in the 1950’s that the movement of goods throughout the country shifted to road transport. Mr Beaching  (In his wisdom) decided to wield his axe closing many railway lines and stations, this gave British Road Services a massive boost for expansion. A shame really, because the railways played a big part in the growth of Mansfield throughout the early years.  Now after more than half a century of chaos on our roads, the railways may be coming back into their own. Although we still do need the road transport, and the two could still live together…I remember seeing an advert saying. ” If you have it, a truck brought it.”

The first big house over the stone wall on the right of the drawing I believe belonged to the station master, and I remember being taken on a visit there by my Father. I guess the connection being my Father was employed by the L.M.S. Railway.

It is often said that it is a small world. The visit to that house with my Father  must have been about 1939. Just a short while ago I found out that my wife’s Grandfather’s sister used to live in that house, I don’t know when it was, but in all probability, my wife’s relation must have been the wife of the Station Master.

Station Hill, Station Road, and Station Approach, should not be confused with Station St.