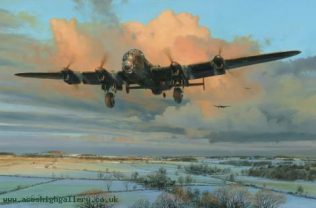 I have been a resident in Mansfield for 50 years – am now in my 89th year – in 1938 I was a typewriter mechanic with Nottingham typewriter Co on Albert St  then volunteered for the RAF in 1939 spent two years in the Sudan servicing Spitfires-Hurricanes-Harvards-Tomahawks-returning to U.K. for aircrew duties – flew Stirling Bombers – and Lancaster Bombers – totalling 64 missions – after WW2 returned to Mansfield and founded own Office Company “TaylorBrown” built up a thriving business and eventually formed another business in Nottingham – after retirement and at the age of 86 I attended a word-processor class at West Notts Technical College and wrote my war-memoirs entitled “Per-ardua-ad-astra” following up with a digital camera course.

My book is currently available in all Nottinghamshire Libraries and is priced at £10.