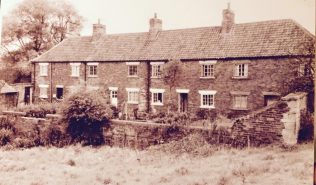 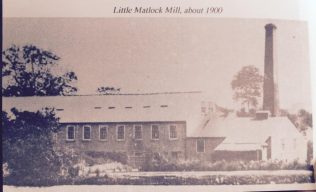 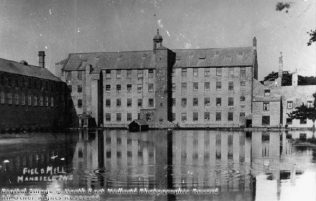 Special thanks to Brian Poole for his permission to use this photograph . The  cottages  stood at the head of Bleakhills Dam , Mansfield.  The photograph appeared in the local Mansfield paper, and was purchased by Brian’s father from the newspaper many years ago, long before they were demolished.

As a youngster growing up, I knew this area of Mansfield very well and spent many happy times growing up in the lanes and fields . Walking, fishing, playing, exploring, and yes, even swimming.

The larger of the two dams was called Reed Mill Dam, and the other dam, being at the side of Bleakhills, was called Bleakhills Dam. Our Ancestors were extremely clever at making very good use of the river we had been blessed with in Mansfield, the damming of the river Maun in several places helped our industries immensely.

Dam Head Cottages were in no way unique. Cottages like these were replicated throughout Mansfield, it was where Dam Head Cottages were situated that made them special. Mansfield , being the Industrial town it was at the time, was rich in stone from the many quarries in the area. This stone was used to build many stone houses of this nature. Blocks of stone cottages were dotted all over Mansfield. I can recall two further blocks on Sheepbridge Lane, one on Hermitage Lane, the Byron Yard, Quarry lane. Wood Court had several and so did Newgate Lane.

There were four cottages in the making up of Dam Head Cottages. I can only tell you of how it was in the 30’s and the war years that followed. I do remember the Allen family, living in the end house. I remember Jack and Tommy Allen.They both attended Moor Lane School, and I believe Rosemary School.  Tommy would be about 84 now, and Jack a little older.

The cottages were in one of the most beautiful of places in our town,  A stream running by, a lake of water in front of them, fish, wildfow, swans and birds of all kinds. A country lane also passing the front, horses in the two fields either side of the country lane, and a short walk further along the lane was farmland that produced all kinds of corn and different foods.

Just to add, the dam that is known to all as Reed Mill Dam, Was also called Bleakhills Dam around the mid 19th century. Adding to the facts that at one time , the dam was one huge dam I have been given an old picture showing the dam in front of Matlock Mill with the caption calling the waters Bleakhills .

To the far side of the cottages , out of view, was another smaller dam of water, being fed by the Cauldwell Stream. Many is the time the waters used to overflow down the small pathway, causing the land to the front of the cottages to become an area of swampland. The river continued past the cottages, then being piped under Bleakhills Lane and alongside the Bleakhills Dam.

It was with much sadness that I drove down Harvey’s Lane last year. The old cottages had gone, the area all round was fenced off, including the dam.  Gone are the horses playing and grazing in the field.