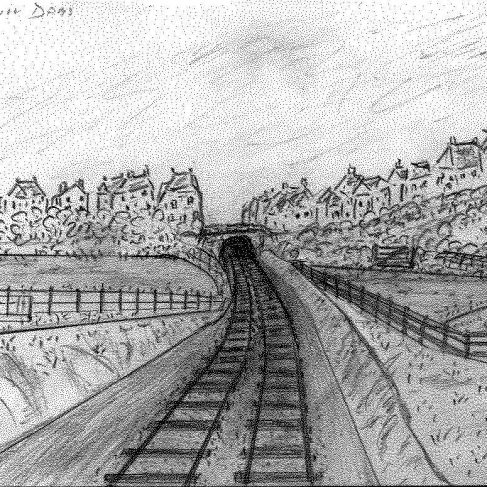 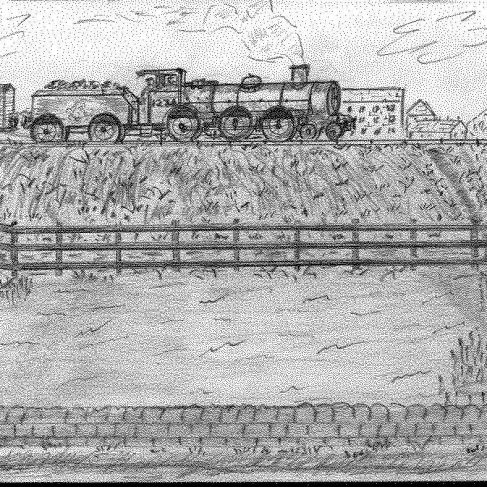 Many years ago, this was one of the regular hunting grounds for we youngsters from the Quarry Lane area, being one of the areas of our beautiful unspoiled town.One can say we were not rich, but in many ways we were. Not in monetry values maybe, but the surrounding landscape gave us a childhood you can never forget. The children of today may never be able to understand how we older folk had the enjoyment of a countryside that was free and safe to roam.

Having seen all the benefits of the inventions that have modernized our world, I have to admit they have made our world an exciting place for our children to live in.

My first sketch shows , and it is from a memory sketch , the L.N.E.R. line where it crosses the Reed Mill Dam,  what was known to us as Bleakhills Dam. t is very likely that when the rail line was laid, in order to take the shortest route, the easiest and cheapest way , was to fill in part of the original large Reed Mill Dam, making two dams, by building an embankment.. Maybe someone can throw some light on this and comment. Looking at an older map, it appears the original Little Matlock Mill Dam was made into three expanses of water. Once by Bleakhills Lane, and again by the Railway Lines.

The Bleakhills was a heavenly area for us to play and learn.

In the distance, one can see where the railway line tunnelled under Sheepbridge Lane, then travelling parallel with Garth Road, it again went under Hillsway Crescent by another underpass, then proceeded to skirt Gregory’s Quarry  and eventually crossing over Nottingham Road by another stone bridge that spanned Nottingham Road close to Baums Lane.( How did Baums Lane get it’s name ? ).Following a line along Baums Lane, it then crossed over Littleworth by another overhead bridge before reaching the L.N.E.R. station on Central Road. All this is now history that has now disappeared.

The second sketch is sort of, the second Dam , known to us as the Bleakhills Dam…Just down Bleakhills Lane…The lane was a cinder track, known to us as Harvey’s Lane. The dam was a smaller stretch of water, not used for any swimming at all, but very good for fishing, and plenty of people used it for that…It was a very pretty area, there were plenty of wild fowl, including swans that nested there and reared their young… On a Sunday afternoon, it was an area were Families , on a nice day, and in those days we seemed to get plenty, would take their stroll along an area of natural beauty, forgetting any problems the week had thrown at them….They were just being a Family…

The scene with the train, was a fairly regular one, just added to show how it was. No comments about the drawing of the train, it was a long time ago…..