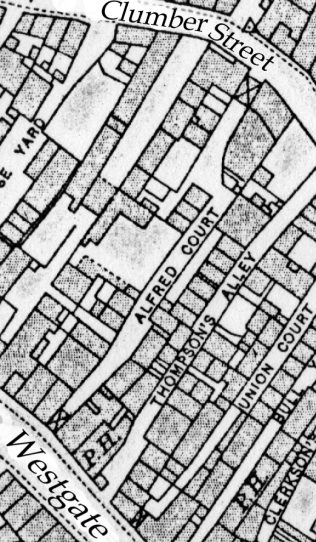 Mansfield town centre was once riddled with over 60 yards, courts and alleys; only a few survive. One of those surviving courts is “ Alfred Court ” which is located at the side of Marks and Spencer and is accessed from either the ancient entrance off Westgate or the 20th century entrance on Regent Street . However an ancient Clumber Street access has long since been closed off. Up to this new entrance the court has retained its original shape although little survives of the early buildings.

These courts were once the centre of Mansfield life and contained residential properties, warehouses, retailers, maltings and public houses. At the beginning of the Victorian era up to 70 percent of Mansfield ’s population lived within 300 metres of the market place; a good portion of them living within those yards and courts.

During the Victorian era Alfred Court contained several cottages, gardens, yards, warehouses, stables, toilets, a carriage house, workshops and even a coffee house. Sadly all that remains are a few walls with their blocked up windows and doors and the original West Gate entrance, although this has been patched up. As you go through the Westgate entrance you will be able to see many grooves carved into the stone walls, which were created as the old wagon wheels scraped against the sides as they passed through the narrow entrance. To give you an idea of life in Alfred Court following is a list of the residents in 1887:

You can see that there was indeed a very varied life within this court, which would have been typical of most of the courts throughout the town centre in years gone by.