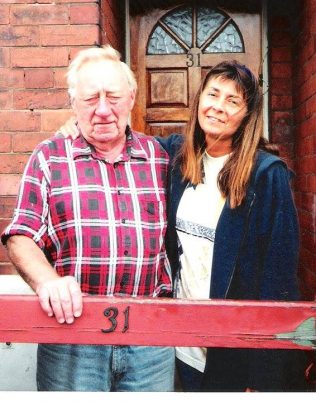 This is a story which was written by my Step Father, Eric Lancashire. I found it just after he died. Some may find it of interest and I’m sure he would have wanted to share it.

I will write it just as he had written it. This is his story….

The Life Story of Eric Lancashire from the age of 14 years old.

Started work on the screens at Ollerton pit, sorting out the good coal from the bad. I was there a while when I was asked to go down to the brickyard which was short of staff and owned by the same Company as the pit, Butterley Co. I worked there for 2 or 3 years and then went back to the pit working underground on the coal face. Three years down there and I packed it in and went on the oil wells at Eakring, which suited me better because I was working in the fresh air. I wasn’t there long before the Army collared me for service to the Country which was at war with Germany.

Passing my medical class A1, I foolishly signed on for 7 years with the colours and 5 on reserve, which made me a regular soldier for the next 7 years, 1941 until 1948.

Taking in the War years, which I saw plenty of, starting at El Alamein and finishing up at Hamburg.

The War over I was posted back to Woolwich Barracks and after 14 days leave I was posted back out to Greece via France, Belgium, Holland and Italy. I arrived at my Regiment which was the 1st Field Artillery stationed at Volos in Greece. After that I was posted to a transit camp in Cairo. I was there a fortnight and in that time came in contact with General Montgomery who was visiting the camp. From there I was posted to Palestine to the 49th Royal Tank Regt. Being an old and regular soldier they gave me a regular job as gunnery store man until my overseas service was completed (5 years).  And I was returned back to good old England, Woolwich.

They in turn posted me to R.A. O.C.T.U. which is the Officer Cadets Training Unit. I stayed there until I was released in 1948.

My term of service finished, I am now on 5 years reserve back in civvy street. Once again I went down Ollerton pit, but realised it was not for me. I tried Bilsthorpe pit also for 12 months, but I also packed that in. I then got a job on British Rail in a relay gang and worked there for about 12 months.

It is now 1950 and there is trouble out in Korea with the North Koreans and Chinese. I am a class A reservist and they were called up for the emergency.

So I found myself back in the Army down at Aldershot getting kitted up for overseas service once again.

Shipped out on a troop ship we called at Singapore, Hong Kong and then Pusan in Korea where we were put on a train and travelled through hills and paddy fields to Seoul, capital of South Korea, where we picked up our guns and equipment and made for the front, which at that time was up in North Korea.

On the way up there we passed the Yanks coming back and saying that the Chinese had entered the war and were advancing in thousands. So we had no alternative but to fight a rear guard action back towards Seoul, along with the Americans. The enemy were finally held at the Injim River for now.

For a week or fortnight there was a bit of peace and quiet along the front. Then we had orders to take posts (which means man the guns). The Chinese were crossing the Imjin River in force and attacking the Gloucester Regiment, and from then on all hell broke loose, and we were firing shells for the next 12 hours to support the infantry. But within 24 hours we had to pull back because the enemy were now threatening the gun lines. So, as the British Army always says, we retired to a better position, we did not retreat.

Incidentally in that attack the Gloucester Regt. were virtually wiped out with a few taken prisoner, including the Commanding Officer, who was awarded the VC.

After that battle there was another period of inactivity and during that time our regiment was relieved by another artillery unit from Hong Kong, who took over all our equipment and we went back to a transit camp down in South Korea to prepare for going home.

We sailed from Pusan, Korea, and was back in Southampton within a fortnight and demobbed from Woolwich Barracks within a week.

Then it was back to British Rail who had held my job open until I returned from the Forces. I stayed there for a while then I got bored and left to work for a Contractor called Gleesons, who were sinking a shaft for Bevercotes pit. I had 6 months on that job before I was sacked for having an argument with the gaffer. I returned to British Rail where I stayed for the next 30 years, retiring at 65.

A couple of months of retirement and I began to get restless again. I heard of a job going at Tesco’s up at Oak Tree Lane. So I went after it and got it. So I am now a trolley man and yard cleaner for the next 3 years. Packed that job in at 70 years of age, but still carried on doing a bit of car cleaning on Brunt street for the office workers and bakery. That went on for a couple of years until I began to feel my age and developed a heart condition which forced me to give up the active life and slow down a bit, and I have been getting slower ever since.