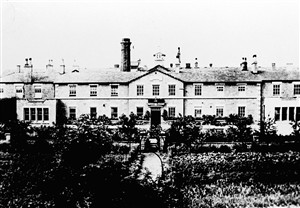 At the end of Moor Lane, at the junction with Sutton Road, is my old school, or schools, as the smaller building to the right of the playground was the Infants School. The two story building to the left was the Junior School. The whole of the grounds to the school were enclosed by a six foot high wall, that is apart from the school frontage, this had a three foot wall with iron railings fitted along the top. There were five six foot gates, two double, three single gates which allowed access to the schools and playgrounds.

To the left of the school was a six foot stone wall, who’s access was through another iron gate onto a flat grassed  field, which I was soon to learn was the sports playing field. The six foot stone wall continued all the way down Sutton Road as far as the old Workhouse and Shoe Company, with gate access to both the allotments and the Workhouse between the school playing field and the Shoe Company. These stone walls were built all over Mansfield, and no wonder with the stone and sand quarries in and around Mansfield.

Directly across Sutton Road from Moor Lane itself, was a single track leading through some allotments with bushes all along the track. This lead to fields which we always called Botany, and apart from the houses on Sutton Road, there wasn’t a house to be seen. Only fields, and down the hill of the field, at the bottom was the brooklet aptly named Lady Brook.

I mentioned the Workhouse earlier, It was a place that I am sure was still open when I was a boy. The stigma that surrounded this old building was unbelievable. This was known locally as the Union. Mainly because it was the Mansfield Union Workhouses. I believe the Mansfield Workhouse replaced the old Workhouse situated on Nottingham Road near to the bottom of Baum Lane in 1837, across the road.  I can recall inmates to this Workhouse finding their way up to Bradder Street along Quarry Lane, when I was a youngster. A man from there used to appear on our street and would sing and do a clog dance for a ha’ penny.

Someone asked if the Sutton Road Workhouse had it’s own cemetery in the grounds.  On an occasion when we visited the shared grave of my wife’s Mother, and Grandmother,  I got to talk to one of the Grave Diggers. He told me that most of the unmarked graves near the wall belonged to the pauper’s of Mansfield, and they contained six pauper’s to one grave. I can only assume many came from the Workhouse.

I am not exactly sure as to whether all the allotments between the school and the workhouse belonged to the workhouse, for I do know some of the allotments at the start of W.W.2. were used by Moor Lane School, with a two fold advantage. Firstly in teaching the boys how to garden. Secondly in helping with the food shortages by using the home grown vegetables. When the war was on, on one part of the allotments  an underground Air Raid Shelter was built for the school.

Neither am I sure as to when the Workhouse, became the Victoria Hospital. Although I do believe it to have been a gradual progress. There was always  a part of the buildings used as a Hospital for the workhouse inmates. Of course there had to be. I do know that in 1945, my father died in what was an old part of the Victoria Hospital, so I guess it was during W.W.2.

I often reminisce when looking back in my life, and would not change my boy hood  in Mansfield, for living anywhere else in the world.