You are here: HomenextPlacesnextMansfieldnextMansfield BusinessnextMemories of the Saturday Market Pea Stall Part 1 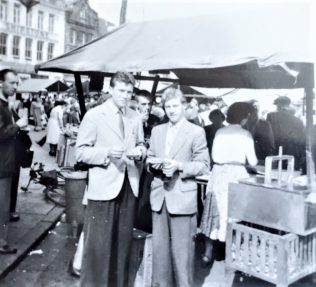 It was about February 1960, I used to help out on a Saturday at Mr. Ted Bennett’s garden on Bancroft Lane, cleaning out his chickens, planting lettuce and cabbage plants, watering the tomatoes and sweet peas in the greenhouses and learning to make wreaths when my brother Geoffrey joined The Royal Air Force at RAF Valley in Anglesey and vacated his Saturday job, which was keeping the pea stall which stood on the main market next to The Market Hotel, supplied with peas, cockles, whelks and mussels. A job he had been doing for about 18 months.

At this time, the business was owned by Mrs. Margaret Childs (50%) her niece Mrs. Jean Harold (25%) and Jean’s brother, Mr. Michael Powell (25%). At this time, Michael was serving in the army as he was a regular soldier. Mrs. Childs had two sons, Tony and Derek who used to help from time to time.

I lived with my mother and father and brother at no. 36 Layton Avenue until my parents bought their first house on Brookland Avenue, off of Bancroft Lane, that would be 1952 when I was 11 years old.

When we were living at Layton Avenue, we lived next to Mrs. Margaret Childs, who lived at no. 34. She was Aunty Maggie to me, (no relation) her brother James (my father’s best friend from a very young age,) married my Dad’s sister Elsie.

In the late 1800’s a pea stall was owned by an unknown elderly gentleman who was terminally ill in the hospital, who was being visited by Mrs. Childs mother, Mrs. Nellie Johnson. This gentleman offered to sell the business to Mrs. Johnson for £1.10 shillings (he wanted some baccy money) Mrs. Johnson lived at no.9 Westfield Lane with her husband. I never knew Mr. Johnson, he died in March 1942 just after I was born, but I do remember Mrs. Johnson (Grandma Johnson to me, but no relation) always dressed in black, complete with black hat.

Michael Powell tells me that his grandmother was so poor, she could not afford to buy peas to boil up and sell until her husband brought his wage packet home. My Uncle Jim, (her son) and his wife, Aunty Elsie lived next door in no.7 Westfield Lane. The two houses are still standing and lived in at the time of writing. The peas were boiled at no.9 Westfield Lane and then taken to the market for sale. I have no idea if shellfish was sold at the time, or when they added shellfish to go with the pea sales.

It would have been very difficult to prepare the peas at the house on Westfield Lane because the kitchen was so small. One person could barely get inside it. I do remember a shallow brown earthenware sink, fixed to the house wall in the back yard, under the back window. There were no taps, and at my young age, I could never work out why. Michael tells me that there used to be a well in the back yard which served a pump for both houses water.

Soon after Mr. Johnson died, Mrs. Maggie Childs (Mrs. Johnson’s daughter) took over the preparation of the peas, cockles and whelks at 34 Layton Avenue. She had a couple of gas rings in a greenhouse which was about 12 feet by 10 feet on her back garden, which they had basically turned into a kitchen. Her sister Nellie Powell, who was mother to Jean and Michael and lived on Westfield Lane, and my Aunty Elsie used to come every Thursday and Friday after the whelks, cockles and mussels had been delivered by a British Railways 3 wheeled Scammell truck on the Wednesday, to prepare everything. The shellfish was bought from Lovelace and Co. of Boston, Lincs. The shellfish was all boiled up and when cooled were removed from the shells and washed and drained before being placed in white enameld buckets ready for taking to market. Every Thursday a one hundredweight sack of dried peas was put in a galvanised wash tub to soak ready for boiling up on the Saturday. The died peas were bought a ton at a time, there being 20 sacks each delivery. It fell to her son’s Tony or Derek to carry each 1 hundredweight sack upstairs into the spare back bedroom where they were stored until needed, then each Wednesday, one sack would have to be carried downstairs again for soaking.

Tony worked at The Metal Box factory in Rock Valley as a tool setter in the Talcum Tin department and Derek worked as a gas fitter at the gas board, and when they had to work Saturdays at their places of work, Michael made the journeys with the wheelbarrow until he joined the army, then my brother Geoffrey took on the role, and when he joined The Royal Air Force , the role was handed to me.

By this time environmental health had inspected the preparation premises at no.34 Layton Avenue and insisted that a purpose brick building, white tiled inside must be built with an extraction fan if the trade was to continue. This was duly carried out.