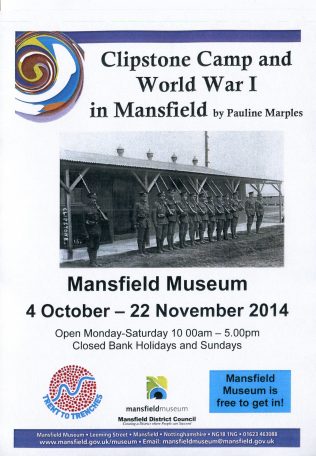 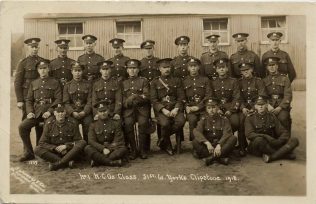 This special exhibition which attracted many visitors from far and wide was held in Mansfield Museum between October 4th – November 22nd 2014 .

In May 1915 men of the UPS (University and Public Schools Brigade)  of Kitchener’s New Army began arriving at a newly-built Military Training Camp at Clipstone. From small beginnings, the Clipstone Camp grew to become a massive concentration of wooden huts which, at its height, was home to 30,000 people – at a time when the population of Mansfield was only 37,000! Though many such camps were established, it is believed that the one at Clipstone was the largest in the entire country.   It also served as one of the biggest Demob Centres at the end of the War.

The exhibition, curated by local historian Pauline Marples, was the third in our trio marking the outbreak of hostilities 100 years ago. The camp’s story was be brought to life by photographs, documents, artefacts and the letters of some of the thousands of soldiers who were stationed there.

Visitors had the chance to learn about the Military Hospital and its nurses, the Women’s Army Auxiliary Corps (WAACs) and the civilian workers at the camp. The impact of such a massive influx of people into the district on local communities was considered, as was the shadowy tale of ‘the women who went a little too near the camp!’

On Tuesday 11 November as part of the commemoration of the War, the Museum held  a ‘Clipstone Camp Remembrance Day Service’, led by Rev. Ann Anderson. Visitors and staff joined together for a short service to remember all those who lost their lives in WW1 and in all conflicts since. The service began at 10.45am and lasted for around 30 minutes, it was a very moving service made more so by the laying of poppies on photographs of war grave.