A Doggie Story and Clipstone Camp 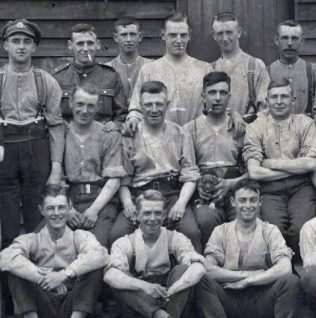 zoom
Soldiers at Clipstone Camp. Walter Fred Lawrance (smoking a pipe) of the York and Lancs Regiment is holding a puppy.
Private collection

Among my collection of Clipstone Camp photographs are one or two of soldiers and even a nurse with a dog on their knees. Could one of them been the little dog mentioned in the story revealed in  the ‘Yorkshire Telegraph and Star’ Newspaper January 22nd 1916 under  ‘Notts. Notes – Doings in Mansfield, Retford and Worksop’.

‘A terrier was accustomed to follow his master’s conveyances with supplies to the Clipstone Camp, and was much petted by some of the soldiers. When it got its foot injured in a trap in the woods, some of the veterinary corps rendered first aid, after which it became still more attached to its camp friends, and when some of the detachments left for France the dog went with them.

Out there it rode regularly on the supply vans, and one day when passing a body of newly arrived troops it suddenly became wild with excitement, and could not be controlled. Amongst the new arrivals it had recognised its master.’