You are here: HomenextPeoplenextPeople (Miscellaneous)nextMajor (QM) Mason GK MBE RE 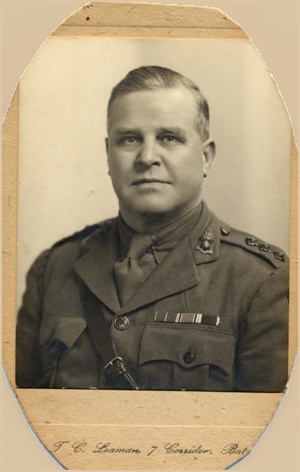 Born in Mansfield, Nottinghamshire his parents were Norman Matthew and Hannah Mason. The family lived at 55 Broxtowe Drive, Mansfield when the 1911 Census was taken and it shows that Charles had an extended family of eight other siblings – including six brothers.

He attested for the Royal Artillery on the 2nd March, 1920 at Mansfield and gave his occupation as a Miner.

His RA Attestation entry shows that he married Winifred Florence Duhy at Cahir, Co. Cork (actually Co. Tipperary) on the 26th December, 1921 – a very interesting and dangerous time in Ireland. Winifred was the daughter of John Duhy from 10 Carrigeen, Kilcommon, Cahir, Co. Tipperary; John was a former soldier of the Royal Artillery who served from 1895 to 1907.

Although the Irish War of Independence (as they refer to it) ended on the 11th July, 1921 – much fighting and sectarian violence continued throughout the country as the IRA embarked upon a savage Civil War with the new Irish Free State forces and at the same time the IRA continued its destruction of those who were Protestants or those deemed to support the British Government or the new Northern Ireland Government.

Cahir was the location of the Old Military Detention Barracks and was the temporary home of a soldier of 42nd Brigade RFA – L/Bdr B.C.Shreeve who was accidentally shot in 1920 by another soldier. By 1920/21 this whole area was very dangerous for British Army personnel as the case of two Royal Artillery Officers (Lieutenants B.L. Brown MC & D.A. Rutherford MC*) showed when they went away in civilian clothes to Killarney for a “holiday” and were never seen alive again – their bodies have still not been recovered. In late 1921 their deaths were claimed by the IRA from Macroom and notification officially accepted by the UK authorities.

In view of all this it would appear that Charles was stationed in Ireland at this time and presumably played his part in the conflict there during 1921.

From 1926 to 1928 he appears on the electoral rolls for 71 Bradder Street in the Burgh of Mansfield, Nottingham also on the absent voters list as a Lance Bombardier and serving with 1/28th Field Brigade, RA.

The next trace of Charles is in Hammersmith in 1930 on the electoral roll showing his residence as the Drill Hall in Wood Lane, Shepherd’s Bush. The 254th (19th London) Battery, RFA TA of 64th (7th London) Field regiment, RA TA was based there in the 1930’s (the building still exists).

For his service in WW2 he was awarded the 1939-45 Star, The France & Germany Star, Defence Medal and War Medal.

Awarded the MBE Military in the New Year Honours List of 1944.

Charles retired from the Army in 1953 and came off the Reserve of Officers List in 1957.

This information is from research I am doing on various Royal Artillery Officers.

I am sure Major Mason is from the same family on the Masons of Bradder Street Page on this web site.