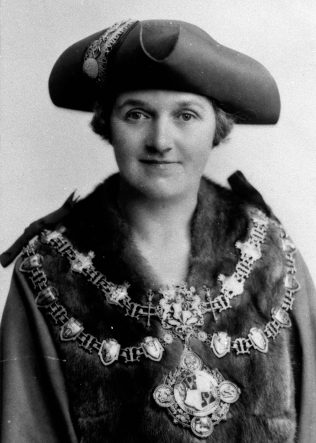 Mrs Ethel Wainwright, the daughter of a Station Master, moved to Mansfield from the Manchester area on her marriage, in 1900, to Albert John Wainwright, also a railwayman.   A strong supporter of the Women’s Suffrage Movement, she possessed a great determination and pioneering spirit which led her to achieve many “firsts” in her life time:-

Her first public work was in 1915 as a member of the Borough Food Committee responsible for the relief work during the Great War. In 1919 she represented the North Ward on the board of Guardians and in 1920 she was elected Labour Councillor for the same ward – a post she was to hold until her retirement in January 1926.

In 1929 she was elected the first Lady Mayor of Mansfield. Her only daughter Dorothy, a teacher at the Brunts School for thirty-five years, was her escort during her term of office.

Throughout her public life Mrs Wainwright’s greatest interest was in the welfare and education of young children. During her thirty-two years of service, first as chairman of the Local Education Committee and later of the West Notts Divisional Executive she saw vast changes in educational thinking.   In the early thirties her dream of a special school for frail children was realised with the building of the Berry Hill Open Air School. In her speech at the opening she said “No system of education can be complete unless it cares for all the children and particularly those who are less fortunate – Mental development can only take place when the physical well-being is carefully considered.”

In 1937 Mrs Wainwright was appointed Vice President of the National Association of Education Committees at their conference in Margate, and also became a County Councillor.   1944 saw Mansfield lose it’s battle to decide future educational policy. It was then that she became Chairman of the West Notts Divisional Executive, a post she held until her death. In 1945 she approved the acquisition of Nissen Huts on the American Hospital Site on Sutton Road as a temporary Technical School on the raising of the school leaving age.

In the 1946 Victory List of the King’s Birthday Honours she was awarded the O.B.E. in recognition of her services to education, and in the same year was elected to serve a second term of office as Mayor of Mansfield.

In 1947 domestic science departments in schools were in danger of closing owing to lack of staff. Mrs Wainwright solved the problem by encouraging sixteen housewives to be trained as teachers.   In the same year Alderman German Abbott proposed and it was unanimously accepted that Mrs Wainwright should be made a Freeman of the Borough. This great honour was conferred upon her on the 20th July 1948 at the Palais de Danse.

October 2nd 1954 saw the opening, by Mr Chuter Ede, of the new JuniorSchool which was to bear her name. Mr Ede commented that, “The name of this school would perpetuate the name of one of the greatest exponents of higher education this country has ever had and it is fitting that this tribute should be paid in her lifetime.”   “Mrs Wainwright was in every sense a pioneer. She was possessed of a crusading spirit which found it’s expression in the number of offices which she became the first woman to hold”. “She has left a legacy of benefits for which the town, the county and indeed the country has reason to thank her.”

By Members of the Adult Education Class 'Genealogy Workshop' 1988/89