Devil at the Abbey 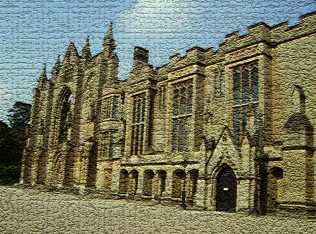 Caroline Lamb described the poet, Lord Byron, as “Mad, bad and dangerous to know”. The poet’s father received the nickname of “Mad Jack”. His grandfather, a vice—admiral in the Royal Navy, became known as “Foul weather Jack” because of his apparent ability to attract storms at sea as a result of which he was twice shipwrecked. However the most eccentric title must go to the admiral’s brother, William, the Fifth Lord Byron, who was not only known as “The Wicked Lord” but also as “Devil Byron”.

Rather aptly William was born an bonfire night in 1722 and at the age of 13 he inherited the title of the Fifth Baron Byron of Rochdale along with estates including Newstead Abbey, his ancestral home. At the age of sixteen he forsook his education and joined the navy for five years where he took up the appointment of Lieutenant on HMS Falkland.

When 21 he became a freemason and at the tender age of 25 became the Grand Master of the order. After five years he was pressured into relinquishing this office due to neglect of his duties.   Since the civil war of the previous century the Byron estates had not been able to provide the lavish lifestyle that a peer was expected to have.

Although Newstead was a magnificent mansion only frugal living could maintain its standards, however frugality was not in William’s nature. After careful courting he married Elizabeth Shaw, a sixteen year old, being nine his junior. With her came a dowry of £70,000, which over the next few years was spent on travel, paintings and the high life.
Whi1st at his club in Pall Ma11 in 1765 he had a quarre1 with his neighbour, William Chaworth, who was also his cousin. This quarrel ended in a dual of swords but within seconds Lord Byron had delivered the fatal thrust. Since there were no witnesses to the dual Lord Byron was charged with murder and subsequently tried by his peers in the House of Lords. Although his peers found him not guilty of murder they did find him guilty of manslaughter. When asked if he had anything to say before sentencing he pleaded a statute of Edward VI, which basically extended the ‘Benefit of clergy’ to the Peers of the Realm. This claim enabled him to walk out of the court a free man. This is when he inherited his titles “The wicked Lord” and “Devil Byron”.

His only surviving son and heir fell into disgrace when in 1771 he married his cousin, a daughter or Foul Weather Jack, against his fathers will. For this act he decided to ruin his son’s inheritance. He was to continue his lavish lifestyle but now at the expense of the estate. Over the next few years the family treasures and the great art collection were sold off, even fire places were sold. The estates were stripped of their fine oaks and thousands of deer were slaughtered.
Life must have become intolerable for his wife for she left him taking with her their only daughter. One of his few remaining, servants, Elizabeth Hardstaffe, became his mistress and was known as ‘Lady Betty.

He constructed a folly castle on the top of a hill and battlements and a mock fortress at the side of the Great Lake . The castle, being a status symbol of the day, is rumoured to be the location of many orgies, even whilst his wife was still with him.   The battlement and fortress were endowed with cannons. Upon the lake were several scaled down versions of ships including a twenty gun war ship. Here he would re-enact sea battles, often by firing upon smaller ships with a servant still on board.   Another legend tells us that on one occasion he was displeased with a coachman so he called the coach to halt, got out, shot him, put the body into the coach alongside his wife and then drove the coach himself. He is also said to have pushed his wife into the lake: no wonder that she left him.

A favourite pet was a wolf which ran about with the dogs and played with the cows. He succeeded in ruining his son’s inheritance but all to no avail for his son predeceased him. When the wicked Lord himself died it is said that he died in the scullery because it was the only room in the abbey that was dry. Legend also tells us that during the latter end of his life he would feed the hundreds of crickets that infested the building and upon his death they all marched cut of the Abbey and were never seen again.