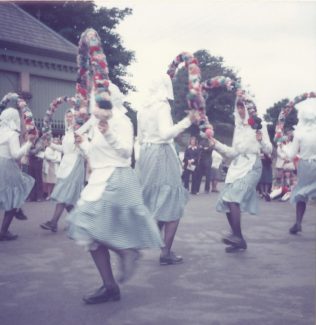 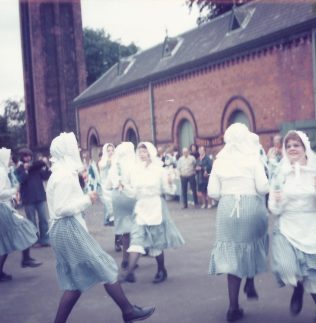 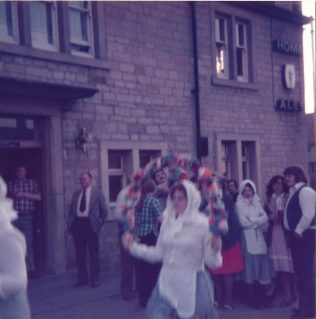 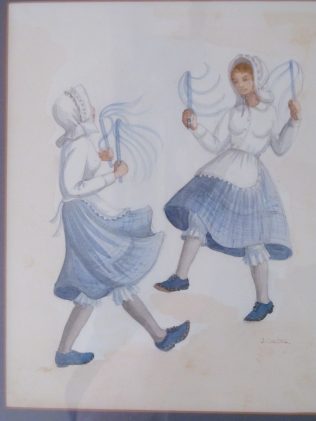 From my home town of Doncaster via Manchester Polytechnic I moved to Mansfield Woodhouse to start my married life.  I have been involved in dancing since doing country dancing at primary school and starting Scottish dancing once I left school, so I looked for a dance group to join in the Mansfield area.  I found Penford’s Mill, who were a women’s North West Morris side based in Mansfield.  I went along in 1976 or early 1977, I can’t remember the exact date or the venue we used to practice in but it was in Mansfield.  I was made very welcome and soon picked up this new (to me) form of traditional English dance and purchased my first pair of handmade English clogs from Walter Hurst of Wigan.

I don’t know the origins of the name of the side as they were already well established when I joined.  I know they were named for the mill which stood on the corner of Skerry Hill and Carter Lane but I don’t know the connection.  The side’s kit consisted of pale blue checked skirt, white blouse, white apron, white poke bonnet, white bloomers, black tights and black North West clogs.  We used sticks with ribbons and bells and garlands with flowers in the dances.

Within a few months of joining I had my kit and clogs and was out dancing with the side outside pubs and at various venues around the Mansfield area.  I absolutely loved it!  The three photos are of us dancing out in August 1978 and the fourth is a watercolour painting of me and another dancer by an artist friend from Mansfield Woodhouse.

I can’t remember many names but have found a few – I think our Squire (leader) was Nicola Coggles as in Morris Matters published in summer 1978 she was asking for any notations for North West Morris dances saying that we already danced Knutsford, Lancashire Garland, Ashton and Hindley.  I remember that Knutsford was the first dance I learned.  There was also an entry on the website Mudcat by Angela, another dancer, announcing the death in 2013 of Jack Richardson the melodeon player for Penford’s Mill, whose daughter Sarah also danced with the side.

In October 1978 I left my job as Librarian at Mansfield Woodhouse Library to take up a post in Dereham Library in Norfolk so I sadly had to say goodbye to Penford’s Mill.  I had been inspired to keep dancing though so I found a North East stepping side, Norwich Clog, and danced with them for several years and then joined another North West Morris side in Norwich, Fiddlesticks and have been with them ever since.  So thank you to Penford’s Mill for introducing me to North West Morris dancing and inspiring me to keep this important tradition alive.

If any members of the side read this it would be interesting to read and see your memories, I was with the side for just a short time but it had such a big impact on me.